One of the new features in Family Tree Maker Version 2011 was the introduction of "Smart Stories™". I have posted about this in the past.

What new features are available in Family Tree Maker 2011?

This was a Question and Answer page about the new features, Smart Stories™ being one of them.

This Webinar discussed the feature and is in the Webinar Archives. The Webinar can be viewed by clicking on the above link.

This posting was based on my first attempt at using this feature.

Just a little background on this article and feature. My mother had just passed away. Version 2011 had just been released and I hadn't really used the feature before. As has become "something I do", I created a Book for the Celebration of her life that I made available for the gathering the followed her memorial service. The purpose of this book, and others,  were to share her life with those who attended this Celebration.

The article above tells how I used the Smart Story™ feature to create a piece of the book. There are step by step instructions on how that story was created.

A fellow Genea-Blogger, and friend, Randy Seaver has posted a couple of posts about this feature as well.

Randy describes his experience with this feature. I encourage you to read Randy's Blog Post. He goes into some different uses of the Smart Story™ feature.

Then earlier this week he posted this article.

Again, Randy goes into great detail on this use of this feature. He also raises a couple of interesting findings in his use of the feature.

Then, today, he posted this article:

So, I would like to take a minute to talk about the "Practical Function" of the Smart Stories™ feature.

For me, this feature works very well, at least for me, when I created the book for my mother's celebration  that I talked about above.

One of her Ancestors was a Revolutionary War veteran who served and traveled with General George Washington. Trying to tell "his story" in the book, since I know this story would be missed in a bunch of genealogy reports that were also include, I wanted to have a Chapter in the Book that told Jacob Lurvey's story.

Without going into the step by step for either the book feature, nor the Smart Stories feature, I want to show some screen images that will show a little more detail.


This first one is within the Book Feature, with the Chapter shown on the Left (Jacob Lurvey, Revolutionary War), the Smart Story information screen on the Right, with the Edited story in the center. 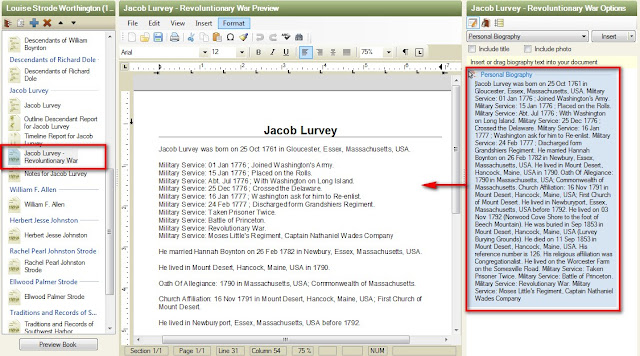 All of the FACTs about Jacob are in the Right Panel. They are inserted in the Center Panel then Edited. As a reminder, the FACT Name and Text (Date, Location, and Description) can NOT be edited from this screen. Going back and make the changes in the Person's Page has to be done and then the FACTS brought into the Center Pane. So, I found it best to try it once, and look carefully at each Fact and Edit on the Person page as required.

To look a little closer at the details: 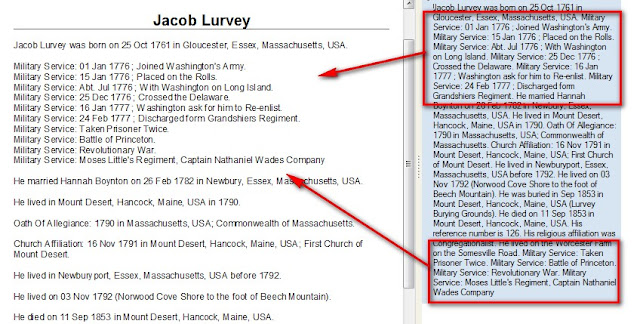 The Editing that was done, was to put all of the information in Date Order and putting all of the Military FACTs together. 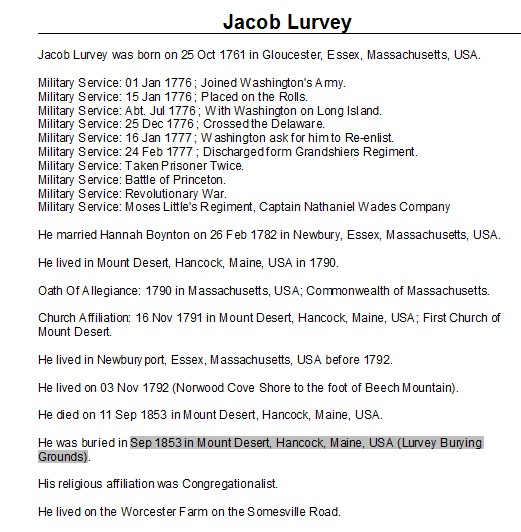 To add a little more to his story, in the chapter before this was a Time Line, still within the book feature, and also introduced in Family Tree Maker Version 2011, helped set up this Smart Story.

The time line shows that the Revolutionary  War started when he was 13 and joined Washington's army at 14.

This is one example, for me at least, of the Practical use of this feature.

Thank you Randy for reminding me to post this blog.


Disclosure:  I am not an employee or contractor for Ancestry.com or its subsidiary entities. I have accepted travel expenses and Family Tree Maker software from Ancestry.com in the past.  I was not remunerated to write this post.