When working with other uses of the Family Tree Maker program, it is Very Important to know the Version Number. In case of the Mac Version of Family Tree Maker, some times the "rules" for naming the software is driven by the platform. 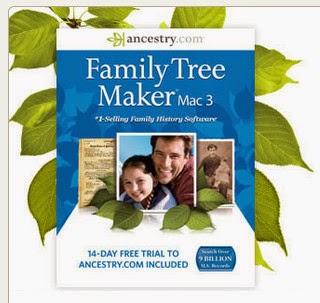 The word “Mac” is no longer in the official name in order to comply with Apple’s guidelines.

So the official name for the current version for the Mac is “Family Tree Maker 3”.

Some times you need a genealogy program to follow this stuff.

Just to further clarify the version name for the Windows version, there is no Version 14, The full correct name if Family Tree Maker 2014 or FTM2014. The previous version was FTM2012, before that FTM2011, etc. These are all the Windows Versions.

It was a little confusing years ago, when we had Version 8, Version 9, Version 10, Version 11, then it was changed to FTM2005, then FTM2006, and finally Version 16, You be able to see why the Full Version number is important.

I have tried to use the Version Number in my blog posts. BUT when you see FTM2014, with the exception of a few Apple standards, the screens and command are about the same. I do try to point them out when I have a chance. I have both FTM2014 and FTM-3.

One other minor point, is that each version AFTER FTM2008, has had Updates or patches. They way you. To check if your version is the Current Version, click on Help, then Check Updates 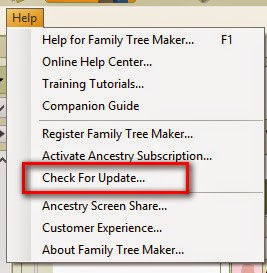 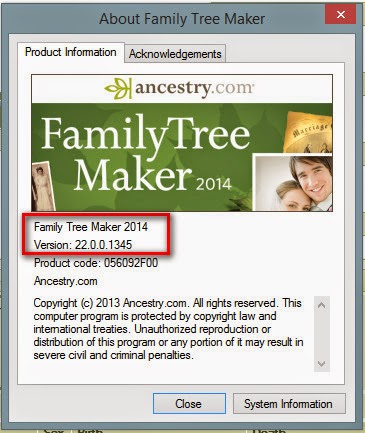 Email ThisBlogThis!Share to TwitterShare to FacebookShare to Pinterest
Labels: 2014, FTM-3

What to Capture from a Death Certificate

I have seen a number of questions about "official" certificates. Here is how I handle a Death Certificate.

Please Read: QUICKTIPS Citations: How Much Is Enough?

Here is a great tip on Citations. Please visit the Evidence Explained website by Elizabeth Shown Mills. Her Quick Tips are awesome. This one is about our Citations.

I try very hard to follow those QuickTips, by using the Template feature of Family Tree Maker (FTM2010 to FTM2014 and FTMM-2 and FTM-3) I think we can do that. In fact, on her User Forum, I have asked the Editor to comment on several of the Reference Notes from FTM2014.

FTM2014 - Where to put the Notes : DearMYRTLE's Wacky Wednesday

The HOA usually covers topics that were brought up on the Mondays with Myrt HOA. This show was inspired by comments from the new Beginning Genealogy series. Here is that video;

Comments can be viewed from the DearMYRTLE Genealogy Community

Email ThisBlogThis!Share to TwitterShare to FacebookShare to Pinterest
Labels: Ancestry.com

Genealogy Do-Over - Adding an Index to my Evernote Notebook

Genealogy Do-Over - My Library - A Tip from a Reader

A member of the Cousin Russ Genealogy Community made a comment on my last video.

I read it and it made so much sense. It was answering a question that I hadn't thought through or didn't even know I had. Thank you Sherri Hessick

I am really liking this Genealogy Do-Over. Thank you +Thomas MacEntee

Have been asked to demonstrate How I created a new 'shelf'. The term in Book Collector by Collectorz.com is Genre.

Will demonstrate how I use Collectorz.com and the Book Collector software so that I know what I have in my library and where that book is located.

As many of you know, GeneaBlogger Thomas MacEntee announced Genealogy Do-Over

This video is a part of the program for the week, specifically Establishing Base Practices and Guidelines. What I hope to share in this video is how I use Evernote and FTM2014 for one specific set of records. I have been trying to determine who many people in my file served in the military. I HAD and recorded that records, but I did not know WHAT I wanted to be able to answer some questions:

The records have be the information but not a good way to answer any of the above questions. Now I can. I'll share how I use Evernote to support what I do in Family Tree Maker.