End of Day Clean Up:

Unlinked Source Group entries. These are User Created errors. I have created many of these myself, BUT I thought that I had cleaned them all up.

I will show you HOW to identify and remove these Unlinked (to Facts) Citations.

Continuing the series on Back to Basics - This time, Where to get Help.

Email ThisBlogThis!Share to TwitterShare to FacebookShare to Pinterest
Labels: 2014, FTM_Help

This is NOT a Family Tree Maker blog post.

From the 24 Oct 2016 Mondays with Myrt, our friend John Laws had this question:


Why does Ancestry add data on transcriptions not on the original documents & if a transcription looks off its probably mis-transcribed take a zoomed in look at whats actually witten down it'll probably be miss transcribed look at the 1881 census Registration district West Ham ED, institution, or vessel 12 Piece 1727 Folio 14 Page number 25 Can you see whats wrong and what's incorrectly implied?

Several of us tried to answer his question. After the Hangout, I went back to see if I could find out what the issue was / is.

The Record in question can be found here:

This is the Transcription in Question

So that you can read it:

To make sure we are on the right page: 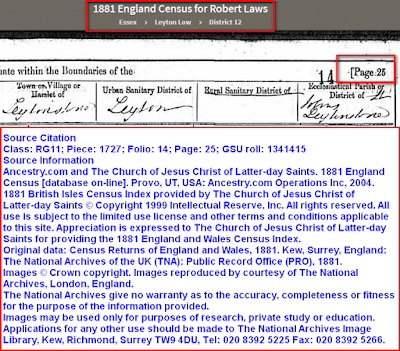 and the right Household: 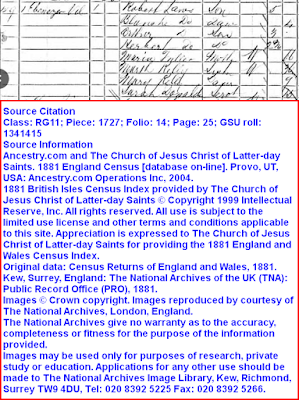 We see the image as transcribed. From the best that I can tell, for this is the first time looking at this type of record, the transcription is correctly transcribed.

She is down the list, be is 66 years old, and clearly marked at "Mother" to the Head of Household.

This two may be why the question. A 5 Year Old, with a 66 Year Old mother.

So, if this was the only record I had to work with, I would probably have questions about the family.

John mentioned that he KNEW that Robert's mother and father were "at sea" during this time period, as his father was a mariner. When John said that, the questions went away.

Would have been the Mother to the Head of Household, or my interpretation Household Owner / Renter, and that


was the son of the absent Head of Household.

Unless I am still missing something, I think that the Transcription is in line with the attached image. The household, at the time, had 3 generations, with the Head of Household "at sea".

The Recording of this can be seen and hear at

Email ThisBlogThis!Share to TwitterShare to FacebookShare to Pinterest
Labels: DearMYRTLE

Another in my Back to Basics series:

FTM2014 - Back to Basics - My Best Practice for File Maintenance