Ancestry Announces 2015 Product and Content Lineup
Industry Leader Talks Innovation and New Collections At Annual RootsTech Conference
(PROVO, Utah) – February 11, 2015 – Ancestry, the world's leading family history service, is ushering in the next generation of family history, with the debut of an updated story centric website, groundbreaking advancements in AncestryDNA that will revolutionize how people discover their ancestors, and the anticipated addition of nearly 1 billion new records to the largest collection of historical records online in 2015.

“We’re incredibly excited about all the amazing things we have in store for our members this year,” said Tim Sullivan, CEO of Ancestry. “In 2015, we’ll be launching some of the most innovative new features and services in our company’s history.  We think these additions are going to make Ancestry an even more powerful resource for our existing users, while also making family history easier, more accessible, and more fun for those just getting started.  We’re also proud of our commitment to continue investing in new content.  Our 2015 content roadmap will be anchored by our expected fall release of more than 170 million Probate and Wills images, one of the most exciting, engaging, and interesting content collections we’ve ever published.”

Over the next year, Ancestry will introduce breakthrough features and compelling content – made possible by powerful advancements in science and technology – that will give you an easier, richer and more engaging way to discover and tell your family story, and make your family history journey easy and engaging, through a highly customized, relevant and historically rich experience rooted in discovery and storytelling.

o    A new and improved Ancestry website will make it easier for anyone to discover and tell the rich, unique story of their family, through new features and site enhancements that will reinvent the ways Ancestry members create and showcase their family story.  The new site experience is currently in limited Beta and will be demonstrated at RootsTech On Friday, Feb. 13 at 1:00 pm MT (Room 151) as well as at the Ancestry booth. Visitors to the Ancestry booth will be able to opt in to participate in the Beta.

o    Ancestry mobile will introduce a full search feature in the iOS app that will empower users to access 15 billion historical records and hints anytime, anywhere in the native app environment. The intuitive interface will make both simple and advanced searches easier, while the presentation of search results will also help you quickly identify and prioritize the most important results, making search less complicated.  The Ancestry mobile team will showcase version 1 search in the Ancestry booth and discuss search and other mobile features in length during an FGS class, “Ancestry’s Mobile World,” on Saturday, Feb. 14 at 1:00 pm MT.

o    Ancestry will also remain committed to providing the best in educational resources with the launch of Ancestry Academy in April. The new resource will offer how-to tutorials and historical guidance to help experts and novices alike. Released as a limited Beta this week, Ancestry Academy will be showcased via demo in the Exhibit Hall on Friday, Feb 13 at 3 pm MT. Those interested in participating in this Beta should stop by the Ancestry booth for more information.

o    With a database of over 700,000 genotyped members, AncestryDNA has generated over one billion cousin connections to date.  In 2015, we project this database to grow to exceed well over one million genotyped members, resulting in even more and higher quality cousin matches.

o    Following the successful launch of AncestryDNA in the UK, we will soon be bringing the service to our members in Australia and Canada, and in doing so, will connect the major English-speaking migrations and globally connect families like never before.

o    Building on DNA Circles, in 2015 we will launch a new experience that will use the latest genetic technology to discover new ancestors without the customer having to search records or build a family tree.  This new feature will transform how family history research is done by providing valuable hints to help experienced genealogist looking to break through brick walls, as well as open family history to a whole new segment of the population. Through this new experience, AncestryDNA customers will be able to discover new ancestors as far back as the 1700’s by connecting into existing DNA Circles.
·         Ancestry Around the World

o    Last winter, Ancestry expanded the availability of Archives.com to users in the UK, and just last month in Australia and Canada.

o    Later this year, Ancestry will announce resources for users in Germany and Mexico. With more than 58 million Americans claiming sole or partial German heritage* and an estimated 34 million residents of Mexican origin** the new sites will give nearly 100 million people in the US alone, the ability to learn more about their family’s story.

o    This fall Ancestry will release more than 170 million name-searchable images of million Probate and Wills records. The most comprehensive collections of its kind, these records will provide access to almost all wills probated in the United States from the mid 19th century to 2000– an unprecedented treasure trove of information to better inform familial narratives.

o    This spring, Ancestry will release the comprehensive service records collection for the Australian Imperial Forces – the main expeditionary force of the Australian Army during World War 1. Made available in time for Australia’s 100-year commemoration of its entrance into the war, the historical records will help honor the brave men and women that served.

o    Also in 2015, Ancestry will make available in the UK, a variety of content collections including WWI War Diaries, Parish Baptism Marriage and Burial Registers, and a collection of Francis Frith historic photos gathered from over 7,000 individual cities, towns, and villages across the UK from 1860-1960.

o    With more than 150 years of combined research experience, Ancestry’s professional research group, AncestryProGenealogists, has helped people trace their family trees and connect with the past for more than 15 years. The team has grown to become the largest service of its kind, supporting research for the Emmy Nominated Show “Who Do You Think You Are?.” AncestryProGenealogists will continue to grow and help solve family mysteries, break down brick walls, and discover the stories that tell you who you are and where you came from.

o    Ancestry will also continue showcasing family history around the world, through shows like Who Do You Think You Are?, Genealogy Roadshow, Finding Your Roots, and Long Lost Family.

“Your family story is a universe that is always expanding,” said Sullivan. “With new products and even more records, Ancestry will provide the most unique, personable, and engaging family history experience on the planet.”

To learn more about how Ancestry is transforming family history, visit the Ancestry booth at the RootsTech Conference in Salt Lake City, Utah from February 11-14, 2015.

About Ancestry.com
Ancestry.com is the world's largest online family history resource with more than 2 million paying subscribers across all its websites. More than 15 billion records have been added, and users have created more than 60 million family trees to the core Ancestry websites, including its flagship site www.ancestry.com and its affiliated international websites. Ancestry.com offers a suite of online family history brands, including Archives.com, Fold3.com, Newspapers.com, as well as the AncestryDNA product, sold by its subsidiary, Ancestry.com DNA, LLC, all of which along with its core Ancestry websites, are all designed to empower people to discover, preserve and share their family history.

Email ThisBlogThis!Share to TwitterShare to FacebookShare to Pinterest
Labels: Ancestry.com

How to put a Citation on an Image - A Thought

There was a question posted in the +Cousin Russ Genealogy Community today:

There were several suggestions that were offered.

I have, as an example, a World War I Draft Registration Card in FTM2014. As I have shared before, I put the Citation for that image, in the description in the Media Workspace for that image. So I have it covered. But when I thought about it, here is what could be done, for saving and citing that image outside of Family Tree Maker.

I use a screen capture program, where I can capture the image and add a caption or citation on that image. I can add it to the Top of the Bottom of the image. So, I just Copied the Citation from FTM2014 and pasted it to the screen capture. 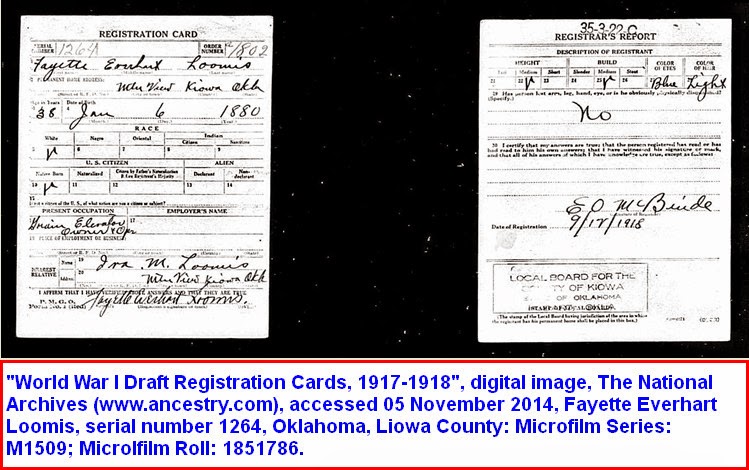 I used colors to be sure that someone looking at that image what know that the citation is what was added to the image.

One of the suggestions, in the community, was great, where it was suggested that a Word Document be used for the citation. So, I tried it, again Copy / Pasted the Citation into the Word Document, made the page Landscaped and made the top margin very close to the top.

This could then be printed, folded so just the Citation was seen, as illustrated in the community, and inserted into an Archival Sheet, with the original document. Very cleaver I thought.

I thought about that for a minute and took it one step further. Why not put the Image that I did the screen capture into this Word document on the document with the Citation at the top (of the landscape page) for the front side of the archival sheet and put the original behind it. The Cited Image on front, original image facing out so that when you turned the page, you would see the original document. 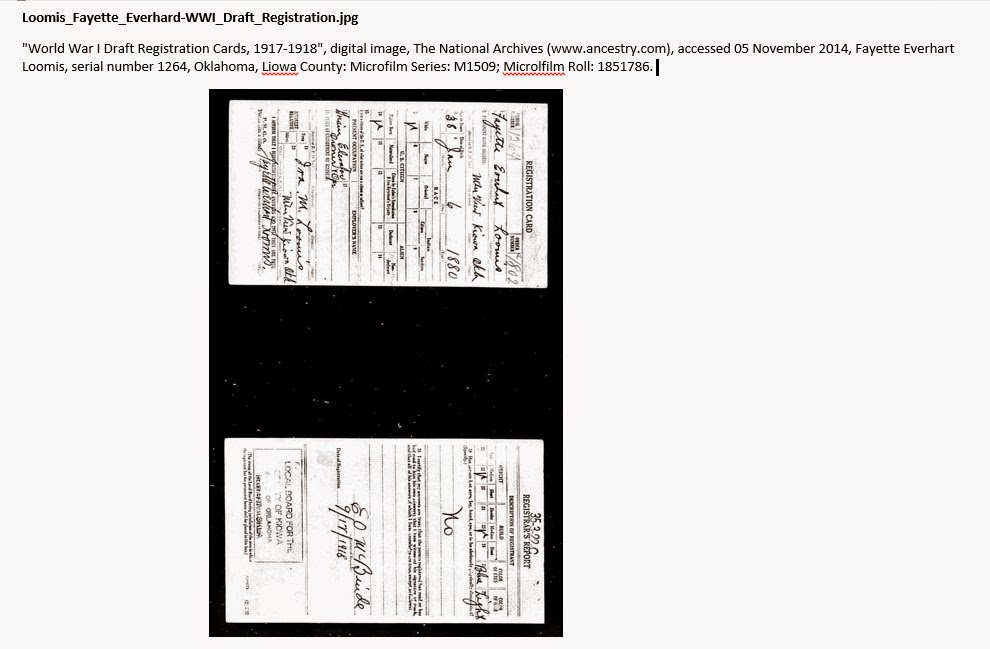 This does two things, for me at least, I have the Filename of the Image, the Citation on the front and the Image when I turn the sheet over.

I would file this in a notebook, using my normal, for me, Filenaming convention, both on the Computer and in the physical form. In this case a notebook.

More about handling of Names

Here are several other blog posts on the Name Fact

Email ThisBlogThis!Share to TwitterShare to FacebookShare to Pinterest
Labels: 2014, Names

A reader of this blog wanted to know a little more about how I use the Plan Workspace, specifically the Task List / To Do List.

I have blogged about the Plan Workspace before, and here are 2 links.

FTM2014 - Plan Workspace - Something to Watch for

I must be lucky, but this is the first time I have seen  a notification what someone Added one of MY photos, in my Ancestry Member Tree to their tree.

In the PLAN Workspace, this is what you want to look for. 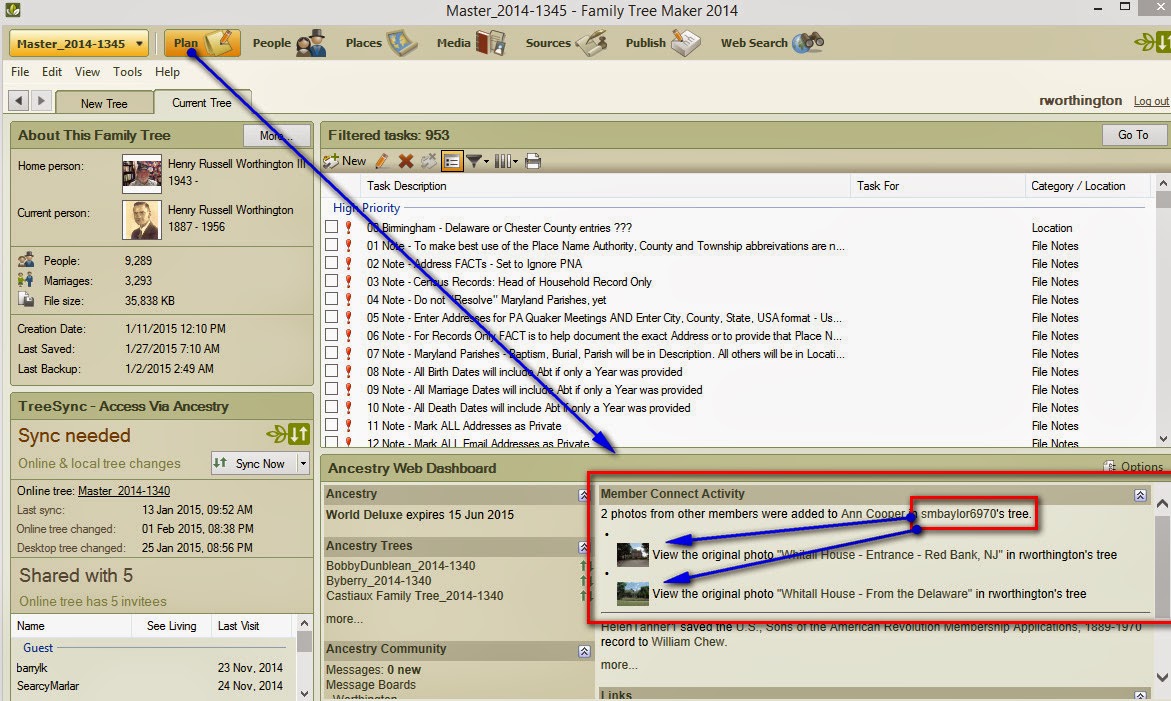 In the lower right, you will see some notification. Here is a little closer view:

It is showing Member Connect Activity, and the other user added my two photos to their tree.

Just to make sure, I went to that tree, and sure enough my two photos are there. 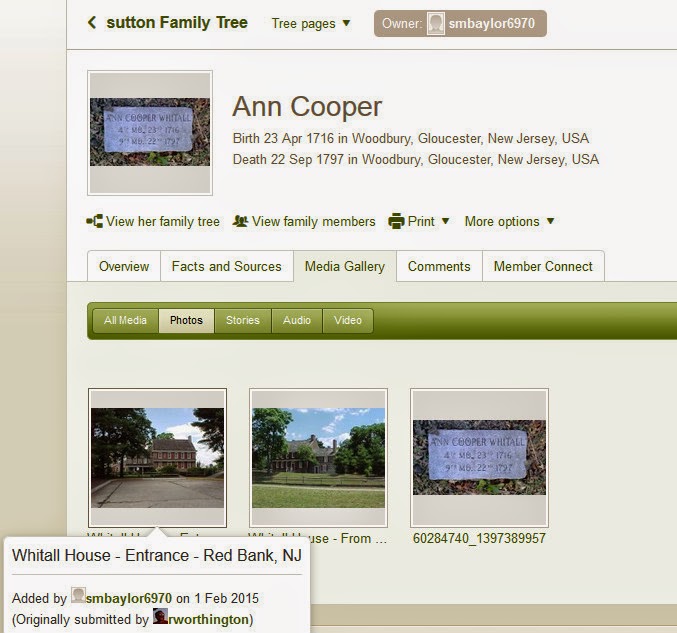 I guess it's a good thing that at least ANCESTRY.COM acknowledges where the image came from.