Who Do You Think You Are? - The Program 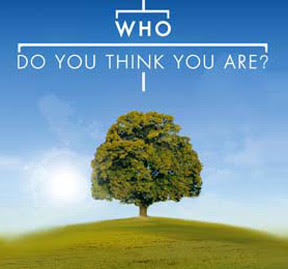 There have been a number of Genea-Bloggers commenting on the first viewing of new TV Series Who Do You Think You Are?


There are over 900 Genea-Bloggers as of this post. You can find them here: Genealogy Blog Roll

I read many of them every day to learn how they, the Genea-Bloggers do their Family Research. This blog was created to help share how the Family Tree Maker program (Version 2008 and newer) works and can be used to support our research. Over time, I hope to see and explore the Family Tree Maker program to help with the research and the sharing of the information that is found along the way.

I have read a number of the reviews by the Genea-Bloggers already and each of them is worth the time to read. Initially, I was not going to post a blog but started to post a comment on one of the reviews. After I started, I figured that I may have my own views of this TV program. So, I am adding my two cents.

I do not consider myself a genealogist, but am very interested in collecting / researching on who my ancestors were. What is my family history? I started to just ‘collect’ the names, and cite my sources, but realized by “hanging out” with Genea-Bloggers online, participating in some of the Blog themes, and having the honor of meeting some of them over the past year.

This group of awesome folk, have changed my mind as to what this “hobby” is really about. Its more about creating a Family History. Collecting, not names, but stories, and telling those stories.

This first episode of Who Do You Think You Are? was a great reminder of the journey that I am on with great hints on how to do some of this work.


What I liked about the first show, and hope it continues, is the Balance of information in it’s presentation.

I think those of us who do Family Research can say “been there, done that”. For example: The Genea-Blogger himself, Thomas MacEntee posted this thoughts on the Destination: Austin Family Blog. Randy Seaver of Genea-Musing, posting his comments and there are many others.

The more experienced picked up some of the details of the hobby. Such as the lack of use of Gloves when handling some important documents and having to wait for something to be provided. However, is that a real issue or is there some controversy on the use of white gloves in handling of these documents?

Having watched the PBS program, Faces of America and the BYU program, The Generations Project, it was interesting how this program differed and how they were the same.


Here is some of what I learned / relearned from this first episode of Who Do You Think You Are? (WDYTYA)

Sarah Jessica Parker started by talking to her mother and picked up some basic, starting information.

Start with the immediate family and collect information. Listen for names, dates, places, and the stories, really listen to the stories.

Follow up on the Stories and look for documentation that may help prove or disprove the stories. In this program, Sarah Jessica Program went to her home town in Ohio and looked at some census records. In this piece of the show, there was some conflicting information, a death date in one year and a census record of the same person in the following year.

But as TV shows go, we saw a very short clip of what went on in Ohio and can only guess as to how much work, time and people it took to give us that short clip.

What do you do with Conflicting information? Simple, follow up. Document where we found our information, recognize the differences, then find where you might find the resolution to the conflict.

The piece that hit home for me, was the “Gold Rush”. I have copies of letters from ancestors who were on the Oregon Trail to their relatives “back home”.

The next stop was New England to find a link, like to the trip to California, to see how the family tied into the history of our country.

Don’t be shocked about what you might find, but don’t jump to conclusions too quickly. Earlier in the show, Ms. Parker and her brother talked about how long they thought the family had been in the US. While in Ohio, there was an indication that one of the surnames had a connection to New England. Picking up on that “hint” we were taken to Boston, where the Salem Witch Trial was introduced. The reaction to this revelation was priceless.

Like the trip to California to clarify a conflict in information, knowing a little more history of the Trials a less shocking conclusion was reached.

Share your findings. The episode ended when Sarah Jessica Parker returned home to re-visit her mother, to share her findings, and the stories.


I learned a lot, confirmed what I thought, and encouraged me to continue to do research. I didn’t watch the program to be taught how to “do genealogy”, but to pick up some of the clues.

Perhaps the show was to draw of the non-genealogist into doing Family research. Several Twitter messages, following the show, indicated that some other family members were showing interest in genealogy. I am guessing that some genealogy websites had some increased internet traffic.

Besides the balance in presentation between folks that do family research and to the non-genealogist, it was the Reaction to the Findings that “can’t be made up”. Actress, yes, but think that her reactions on the screen were real.
Looking forward to next weeks episode.

Here is a link to the NBC Website with some Video’s of the programs:
http://www.nbc.com/who-do-you-think-you-are/video/

Email ThisBlogThis!Share to TwitterShare to FacebookShare to Pinterest
Labels: WDYTYA