Not too long ago, in a Facebook Group, there was a long discussion about how we name our Genealogy Files. The person who started the discussion have a very long file naming system that works for that person.

So, I stopped that really thought about this topic. I'll share my current thinking here, for Family Tree Maker Users. 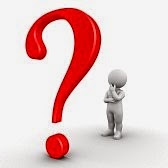 Here is the example that was used (modified a bit)

At the same time, I have just added an external drive, with Back Up software to another back up of my data. It was throwing off Error Messages that some Filenames were TOO long. The conversation of FB indicated that I was wrong and a Windows10 computer did not have a filename restriction.

Looking into this issue, in fact Windows10 had removed an earlier 256 character limitation. The key part of that limitation included Full Path to the file and name.

So, the above example would include (for FTM2017  Users, using the default settings, that would mean having

in front of that. So 55 plus 78 (133) Character right there. Still doesn't meet the 256 character limit. I am sure I am missing some technical character information placed on that old limitation.

So, let's back up a minute. I have a scanning project going on where I set up my laptop computer, with scanner and worked on the project not connected to the internet, nor to have any program running. Just wanted to scan a notebook of photos, letters, and newspaper clippings. 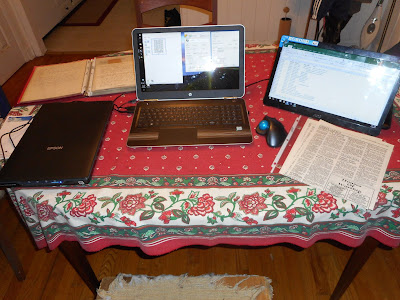 The first step was just to let the computer scan the files and create it's own filename and saved into a Documents\Scanned folder. The notebook (upper left) has pages and I wanted to keep the pages in order and be able to return the notebook to the owner as I received it.

I then renamed the "Image-001" to "File01-01", File01-02, where "file" in the archival sleeve, then the number that followed was the order that the scanned image was in that sleeve. To deal with the Front and Back of that page, scanning both sides, even if it was blank, the ODD numbers were the front, Even numbers the back.

Not very useful, EXCEPT, I got all of the scanning done pretty quickly.

Note the 2nd monitor (oh the right), it had EXCEL open, where I created a spreadsheet to keep track of what I was doing.

The first column has the Scanned Image Filename. Next column was the Location (Sleeve01), Subject, Envelope - 2 - Front, for example. Date / Page was the next column. I entered what I could as the image was being scanned.

There were several sleeves that were empty, but I had [ empty ] iin the subject column. I wanted to keep track of everything, and to be able to provide a Thumb drive with all of the images and the spreadsheet to the owner of this notebook.

200 images, not very helpful filenames, on a Thumb Drive.

Here is where the filenaming thought comes into play AND where and how will those files be used.

When I have files that I am not ready to put into Family Tree Maker, I have them in a "Genealogy" Folder on my hard drive. I might have Surname Sub-Folders, or Place Name Sub-Folders, and Cemetery Sub-Folders. The thought is, where can I find those Media files Quickly when I am ready to enter them into FTM2017.

Sub-Sub Folders could be used, based on my scanning example. All of them were for one Surname, so, ALL of the Scanned Images could be COPIED from the Thumb Drive into the "Jones" or "JONES" Surname folder, still with the weird filenames. Not yet helpful.

Thinking back to the suggested filenaming scheme that started this, I re-evaluated my normal process. That is:

Some may choose to use all Upper Case surname, I choose not to. The important thing for me to consider was the "readability" of the Filename AND Sorting. Oh, Female surnames are always Birth Surnames, for me. I will let FTM2017 handle the married name issue, based on the relationship(s) within the program. IF I don't know the birth surname, I use my "unknown name" format of 5 underscores.

What I also do with filenames is NO spaces. Old DOS day's habit but it works for me. The parts of the filename are separated by one Underscore to replace the space, and a Dash between the Name, Date, and Event.

With the spreadsheet open, now I take the time to Rename the files into the above format AND move that file to a sub-folder. Lets say I am looking at an obituary from a newspaper. The YYYY becomes the Year of the Newspaper, and the Event becomes "Obituary". If there are three scanned images of that obituary or multiple obituaries, I just add "-01" or "-02" even though the date of those newspaper articles may have different dates. What I am capturing is the Year and Event.

Here is where my thought has gone. We always want to Cite our Sources, I have chosen not to "cite my source" in  a Filename. I will do that in FTM2017. And, whether I have a scanned image of my own, or one from an Online Resource, my filenaming works and the citation will remind me where I got it from. That scanned image from that thumb drive will be my the folder mentioned above, while an online image will be in the Filename Media folder in Family Tree Maker.

So far, none of the images that I have scanned are in Family Tree Maker, but in a folder on my hard drive. With the filenaming and the folders that I created, I can Find what i am looking for.

Now to FTM2017. I have blogged about the fact that I ALWAYS use the  Copy Option NOT the Link To option that is available. I will NOT link to those images that are in the Subfolder, but will Copy that scanned image into FTM2017 and the "media" folder. (remember that Full Path Name that I mentioned earlier).

I now can create Media Categories to help find media files from within Family Tree Maker. I don't need sub-folders. For me, the Media Category feature IS the Sub-Folder feature out side of FTM2017. I have 50 or so Media Categories. "Census - Federal", "Census - State" for example.

Taking a Census Record or any Record, the Same filenaming format is used.

This census example is where I am cleaning up right now. I started with

1940_US_Federal_Census-Surname_Firstname_Middlename-State_County. Doesn't sort wall for me, My Citations handle the place of the Census (state, county).

WORD OF CAUTION: Rename the files within the Media Workspace of Family Tree Maker and NOT outside of the program.

Please note: that IF a merge of a Census Record is done in an Ancestry Member Tree, there may be an issue with Citations, as Ancestry handles this type of citation different from the way Family Tree Maker does.

That Census Media file (1), is linked to a Citation, what would provide the Details of that record. That Citation, with media, is linked to the Facts for the Profiles (people) mentioned in that Record.

From Filenames, was can see what Media files that person (name) has, in Date Order.

A Rule about my file, I do NOT use the Suffix Sr (Senor). No birth record that I have seen shows that suffix. Records may, but a birth record may not. The Name format, is the same for that Person's Media Files (always).

So, what about the same name in your file. The "DATE" / YYYY helps tell them apart. The Suffix, if used, also helps. There have been times when I go back and Rename the file, such as finding the Middle name which I didn't have before. I can easily find those media files to rename.

There is another thing to consider. The CAPTION of a media file.

That is important to me, because that is what is going to be seen in the Ancestry Member Tree (AMT). Filenames don't count in an AMT.

My solution is the similar to the filenaming. I replace the Underscore (for space in the filename, to a SPACE in the Caption. The Dash separates the fields.

I want the Caption to be reader friendly.

Two things to remember about the way the Media Workspace sorts the Media Files. !) By Filename, 2) By Caption.

With the "List by: All Media" The files will be sorted by Firstname, Middlename, Surname, Date, and Event. (not concerned about the surname for this sort), but grouped by Person. Sorted by Filename, then would sort by Surname, the SAME is you would see the Files, with Windows File Explorer.

This shows me a "time line" of Media files for a person, sorted either way, Caption or Filename.

One final benefit here, is that in the Media Workspace, All Media, bottom of the Center Panel on the Left is the Number of Media Files, Linked into my database. I regularly check that number with the Number of Files, in the Media Folder outside of the program. Those two numbers should be the same, UNLESS there is a Photo Darkroom folder, which would provide one more "file" in File Explorer vs the count in Media Workspace.

Not mentioned yet, is "those media files" that have multiple "pages" or images. A Census Record where the Household is on two pages. Easy Solution - "Page 1" for the Caption, "-p1" for the filename. I have a couple of media files where there are more than 10 "pages" or media files. I just start, both the Caption and Filename with  "Page 01" and "-p01". Like the dash between the name, date, and event, I use the dash to separate the event from the pages.

Finally: Each of use need to create our own Filenaming scheme.

Try it before you set your filenames up

Find what works for YOU. I can only share my experience and it is working very well for me.