I recently did a blog post FTM2014 - Managing Shaky Leaves / Hints - ToDo List. To follow up on that post I started with a female with a 1940 US Census Record. As I mentioned, I usually follow them first to help identify families and their relationships.

The first person with a 1940 Census was Maude H Lamar, with the Census in Kansas City, Missouri. Right of, I wasn't sure, as the family stayed pretty close to New Jersey, but I needed to follow this hint. 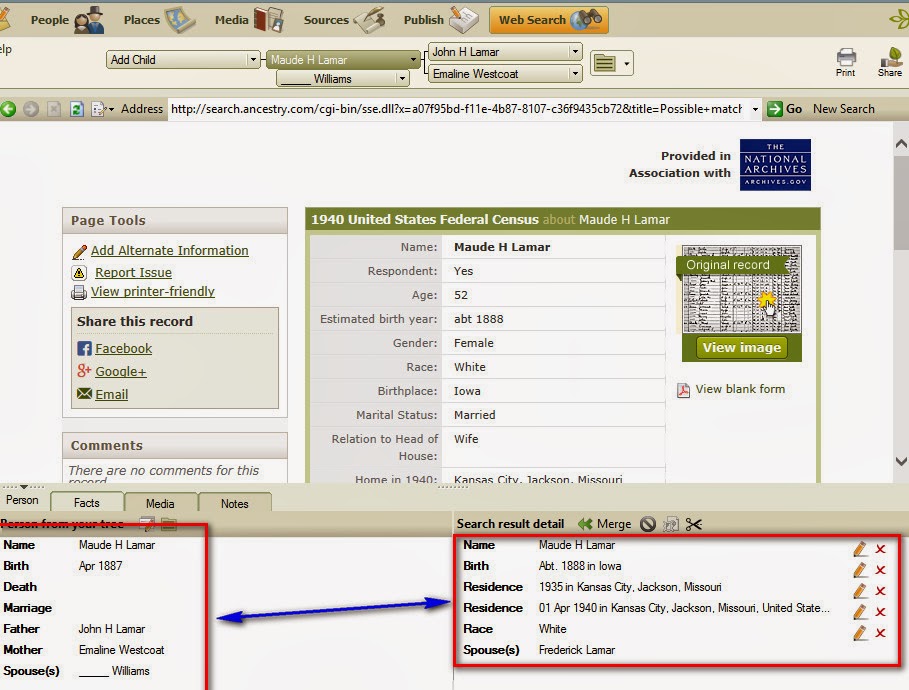 This record doesn't look right, as Lamar was Maude's birth Surname and this record showed a Married Surname. I had enough information in my file, (on the left) what indicated that she married a Williams, first name not known. Not going to do anything to this hint yet.

The next hint was a Church Record. This is close for the Birth year, but looking at the Parents, not the right person. Again, not going to do anything with this hint either. 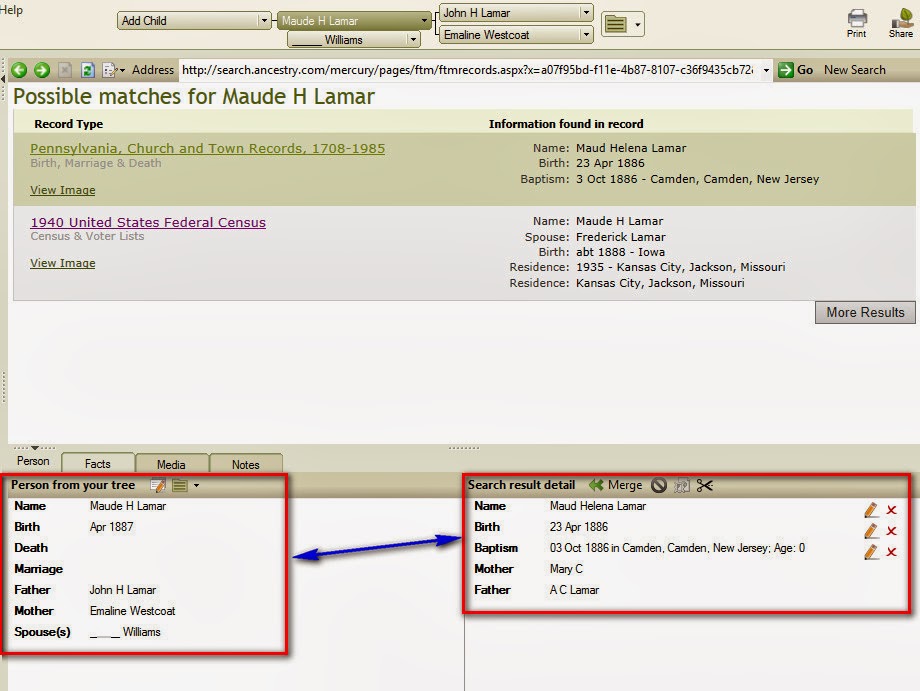 No, I do have the option to Ignore these two hints, which I did in both cases. Clicking on that ICON will indicate that I looked at these two records and have determined that it's not the right record.

Back to the ToDo / Task List I want to make a note that I looked at these to hints, but am not going to do anything with them at this time. 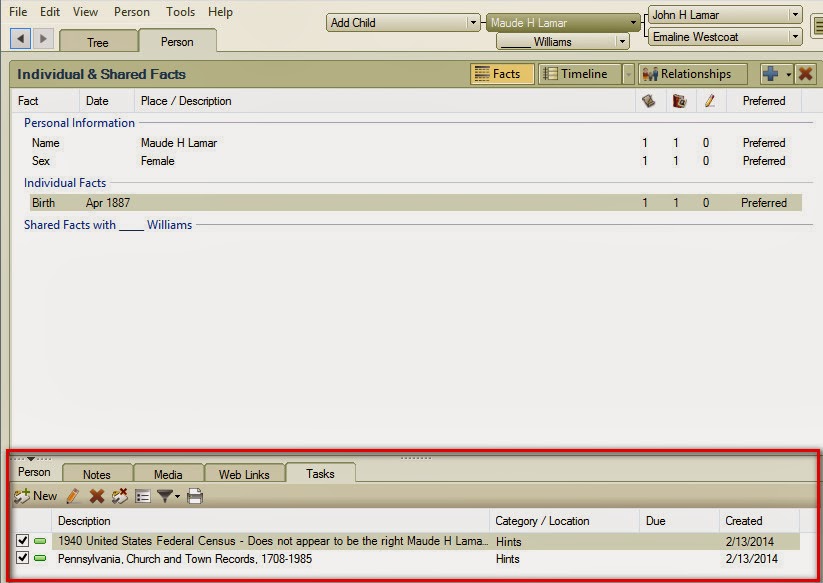 I put a check mark in the completed check box, but did NOT make the Priority Low, as I may still want to look at these two records in the future, as more information becomes available.

I do update the Research Log for this person. This is in the Notes Tab, but the 2nd ICON that says Research Log. I dated the entry with two notes.

18 Feb 2014
HINT: Pennsylvania, Church and Town Records - Location appears to be right, but Parents Names: A C Lamar and Mary C do not appear to be correct

HINT: 1940 United States Federal Census - Does not appear to be the right Maude H Lamar - Married Name and Birth Location not consistent

Remembering that the Church Record was in the right place at about the right time, I looked to see if I have another Maude in my database, and I do. She too has Hints, but no church related hints. Then I looked at her parents names and I see A C Lamar and Mary C Strang. That looks right. 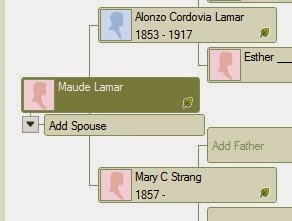 I return to the Web Search Workspace, for the Maude H Lamar and select the other Maude Lamar from the Index. 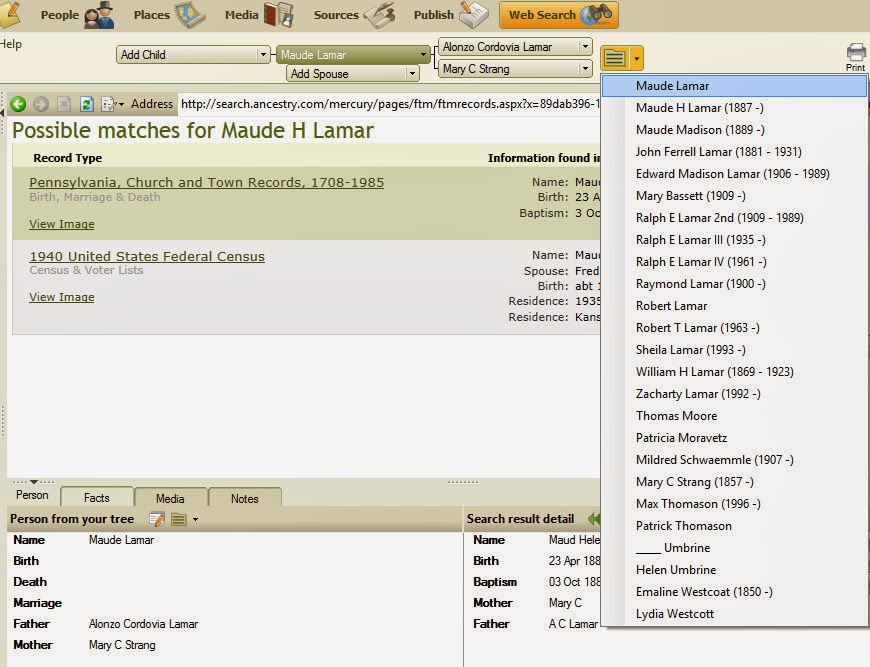 This will move this 2nd Maude into the Lower Left box (my information) so that I can compare my information with that of Ancestry.com

This is the right Maude. The spelling of her name is without an "e" in the Church Record and has a middle name of Helena. This makes some sense, as Maude H Lamar and Maude Helena Lamar are 1st cousins.

I merge the records. That is the Church Record to Maude Lamar, now Maud Helena Lamar. In the first Merge Screen, I selected the Ancestry name as the Preferred Name, but keeping Maude Lamar as an Alternate name, properly cited. 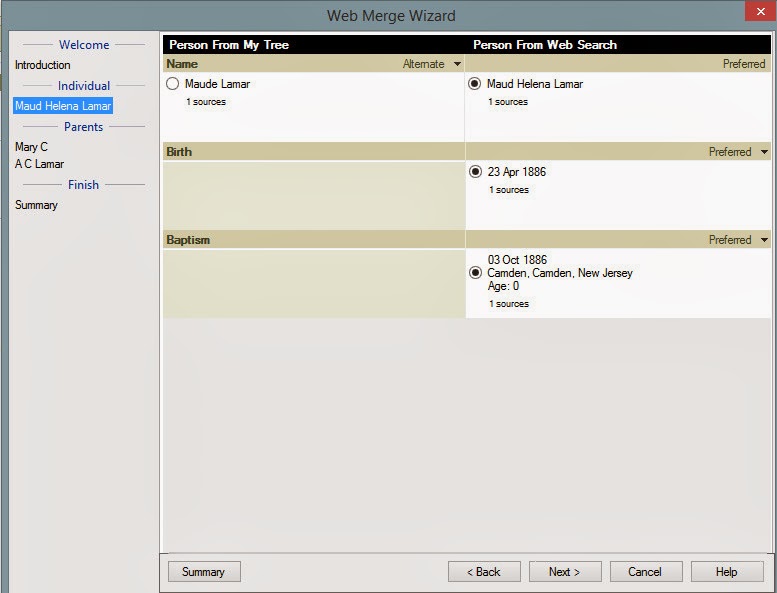 The other merge screens were followed and the Media file, the image of that page in the church record were included in the merge.

I now can go back to the Maude H Lamar with the Hint, show it complete, and change the priority to Low, as I have completed that hint. 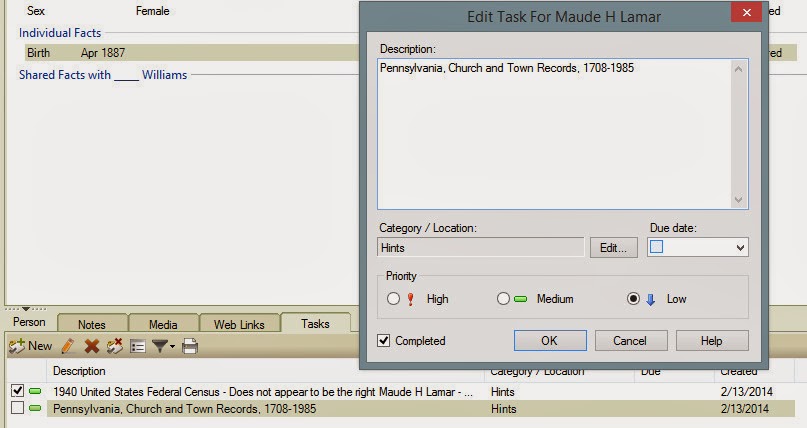 HINT: Pennsylvania, Church and Town Records - Location appears to be right, but Parents Names: A C Lamar and Mary C do not appear to be correct

HINT: 1940 United States Federal Census - Does not appear to be the right Maude H Lamar - Married Name and Birth Location not consistent

I also added a new ToDo / Task to Maud Helena Lamar to clarify her correct Name. I was given Maude Lamar but the Church Record shows Maud Helena Lamar. Will need to resolve that "conflict".