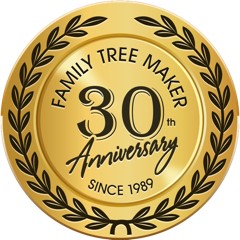 Greetings!
.
It's Family Tree Maker's birthday today and we're going to party like it's 1989. We're taking a nostalgic look back at the brand's roots and looking to the future by launching our ambitious new edition – today! Let's get started.
.
IT ALL STARTED WITH A GUY NAMED KEN HESS
Back when software came on floppy discs that were actually floppy, Ken Hess decided to leave his secure tech industry job to start his own company, Banner Blue Software. Five years later Family Tree Maker was born – 30 years ago today. I caught up with Ken this week and he told me how pleased he was that Family Tree Maker was not only still around but still the leading brand and still pushing boundaries. Ken wrote a book called Bootstrap about his building Banner Blue, and you'll find it in the gift collection when you pick up your copy of FTM 2019.* Congrats, Ken! Big day for both of us.
.
30TH ANNIVERSARY EDITION RELEASED
More than two years in the making, FTM 2019 was officially released today, thirty years to the day from the launch of version 1.0 on floppy discs by Ken Hess and Banner Blue back on September 28, 1989. It's the smartest, safest, most complete Family Tree Maker ever built, and includes our first mobile app for FREE, and a year of free cloud services for all those who pre-ordered a copy.
.
NEW EDITION ROLLOUT STARTS TODAY
Our engineers and 275 beta testers have agreed that it's time to let the rest of you have at it. To ensure that we don't overwhelm the new TreeVault cloud service servers, we are rolling out email notifications over the next week or so to those who have pre-ordered – ten thousand emails at a time. The emails will go out in the order in which copies were purchased. So those who have been waiting the longest get their copies first. Please be patient – everyone will have their copies soon.
.
THANKS TO YOU
As we celebrate this big anniversary we are grateful to all of you who have been so supportive. For those of you who've always had our backs, we thank you for your confidence in us. For those who cheered us on, we've heard you and it made a difference. For those who let us know that “when it's ready” is exactly when you wanted the new edition, thanks for getting it. And for those of you who just left us alone to get our work done, we thank you for understanding and the space to breathe.
.
Can't wait to hear what you think of our two and a half year labor of love – and to share with you a map of the road ahead. Stay tuned!
.
JACK

Email ThisBlogThis!Share to TwitterShare to FacebookShare to Pinterest
Labels: #FTM2019, 2019