The other day, I was getting ready to go teach my "in person" class, when I received an email. I had not prepared anything special for the class, but the email, I thought, was going to be a great question for the class help answer.

I am having much trouble with one of my ancestors, John Ayers. He would be my paternal 3rd gg. I haven't been able to find records of his birth or his parents. I have census records of John and his wife, Sarah Stephens, being in the household of his son, John Wilson Ayers, my 2nd gg. I have records of his wife Sarah's, father, Uriah F. Stephens Jr., my 4th gg, naming Sarah and her husband, John Ayers, in his will. Uriah would be another patriot for me in the DAR, but I have to have proof of John's existence.

This looks like a "brick wall" question to me, but then I don't have "brick walls", I just haven 't done "reasonable exhaustive" (I usually change the to exhausting, because when you find what I am looking for, I am usually exhausted.

The previous week we had a question from another student, who wasn't present, and talked about "how NOT to ask a research question". So, after reading the above problem to the class, I asked on a scale from 1 to 10, how would they rate the question. Most said 7 or 8, then I asked "why" and what was missing. One of the students said "dates". I was able to answer that, as the student with the question sent a follow up email.

What else took a bit of pulling of the teeth, but I let that drop (for now). I told the class that I would enter the data that I was provided into FamilyTreeMaker, Including "Sally". I asked, where would I enter that, one student said "Also Known As", she got a gold star for the day. 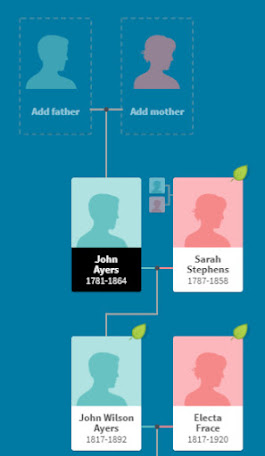 Basically, I had what was provided. BUT, I asked what was wrong with this picture? No answer, they didn't understand my question. So, I reminded them that I use Ancestry Hints 90% of the time. I said that Ancestry searches far better than I do.

For some reason, the notion of DAR caught my attention when I read the statement to the class again, and talked (again) about the National Park Service, Soldier and Sailor website, for Searching for Civil War solders and Fold3 for Military records in General. One of the new students didn't know about Fold3, so we went there looking for Uriah F. Stephens Jr., the father-in-law. I mentioned that I browse Fold3, normally, and demonstrated that. BUT one of the questions browsing was a "location". We did not have a specific location, but that he was born in Connecticut. There was NO result in the Browsing of the Revolutionary War, so I did a Search, and found a 20+ page Pension File. Is that our person? The class said "don't have enough information". (Class Star).

But "Uriah" reminded by about searching on Ancestry. I did not want to search for him on Ancestry, but another student has a good example. The Surname of Jones, 50 Million Records. So I dropped Jones and put in "Omar" for the Firstname. Only 10 Million records. Who knew. What else can we do to get from 10,000,000 down to something manageable. What was his occupation ? "Minister". The search results went to 0 (Zero). (I had cheated and marked that entry as Exact). Demonstrated the Ancestry Search Slider bars, when I asked where Omar Jones was born or lived and entered Delaware, (or neighboring states). 5,000 hints, so we are moving in the right direction. The FIRST Hint, of the 5,000, was a World War I Draft Card. We looked at the Image and SAW (wait for it) "Minister". I reminded the class to read the information about the Records, to see what can be found, and what we are provided in the Transcription of that record. Occupation was not in what Ancestry Provided. Another lesson that I had not planned.

So, back to the problem at hand. Still thinking about the military aspect of the problem, I asked where else could I look. The DAR was the only answer. So, I asked "what about the SAR", Sons of the American Revolution. For grins and giggles, I searched for "Uriah Stephens" on Ancestry, but asked out "Stephens" was spelled. The correct answer was said by all "spelling doesn't count", so I entered the name that was provided.

Again, could NOT have planned the First Hint, a SAR Application Record.

Backing up to the beginning of the class, I had mentioned that I will probably NOT find "Sally" in any record, as it is an AKA. Right there on the application was "Sallie" (ok, spelling doesn't count). But the data what we already had, but close, and a lot of data we did not have, but it was clear that we had the right set of relationships.

On the 3rd page of the Application, was the information for the application came from a Revolutionary War Pension File. I wonder if that one we looked at earlier was THE application that was used for this SAR record.

Back to the image, from the AMT, I asked again what was wrong with that Image. Finally, they saw there John Ayers had NO HINTS. Everyone else, and the Wife's side of the tree also had lots of hints, but John had none.

The closing comment from the Class, specifically the person who asked the question to start with was

Maybe I have the wrong John Ayers