Using Windows Explorer and navigating to the Media Folder for the test file for Roots Magic 4, and Right Clicking on the Folder Name, there are 2 files in that folder and the total size of the folder is 252 KB. That entire folder will probably fit into an email. 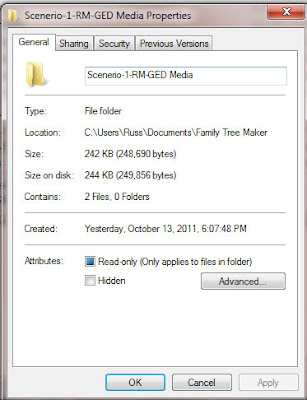 Email limitations for more Media files and larger Media files other options will have to be explorer to get the Media to the other user.

When the receiving user receives the Media Folder or files, they would have to be saved where that user wants them saved. If the receiving end user is also using Family Tree Maker, they can be saved in the < filename > Media folder for that file. The "Find Missing Media" or CTRL+F5 feature can be used by that user.

If the receiving end user is a Roots Magic 4 user, each of the Media files would have to be manually inserted into Roots Magic 4.

I am only using Roots Magic 4 as an example. AND this is not a negative comment on Family Tree Maker nor Roots Magic 4. This issue is a generic GEDCOM issue. As I have said before, I am not an authority on GEDCOM, I only know that the "industry" has not uniform way of Sharing our genealogy research.

So, when sharing our research, both the sender and receiver of a GEDCOM, which includes Media files, have work to do.