Recently some records have been made available in the State of Pennsylvania. For details, please visit this website:

As I have many ancestors in Pennsylvania I wanted to see what records I could find and order them if need be. The website talks about:

It says: "This legislation provides that such documents become public records 105 years after the date of birth or 50 years after the date of death." Looking at this means that only births before 1906 would be available. On the website, they only have 1906. But for deaths, it would be for years prior to 1961. Looking at the site shows that these records start in 1906. Each type listed by year.
Creating a report shouldn't be an issue. But, this list is not indexed, nor can it be searched. Browsing the lists is required. This isn't too bad as when you get into the website, the break down the list alphabetically.
EXCEPT, from the website: "Several years of indices (1920-1924 deaths and 1930-1951 deaths) are listed according to the Russell Soundex method of indexing." Soundex, when was the last time we had to use a Soundex, but this one is very specific. The Russell Soundex is a link to a simple worksheet on how to us it.
Cheyney [ C heyNey ] becomes C 500
Bartram [ B aRTRam ] becomes B 636
Parameters are, for death records, 1906 to 1961.
In Family Tree Maker (Version 2012), a Custom Report can be run. Since it might be easiest if the Dates were obvious in the report. So, go to the Publish Workspace, Person Collection and select Custom Report.

That generated a 346 page report, for this file. Not very helpful, but it's a start. Next will name the report Pennsylvania Death Records, then select Items to Include:

The title is filled out, and to the upper left of that title is the Items to Include ICON. Clicking on that will bring of the above screen, where the Death Fact as been moved to the top of the list with the Up Arrow, just below the Red "X" and the Sort Order will be Death Date, followed by the Name. Still at 346 page report.

The next step will be to Select the Individuals for the Report. The default is Immediate Family, but we'll select Selected Individuals. The first thing is to Include Everyone who has Died in Pennsylvania, based on the information in my file. Filter IN, the individuals with a Death Fact PLACE that contains Pennsylvania.

That will reduce the list of 8,310 down to 144. Those names will move into the Right Hand panel. 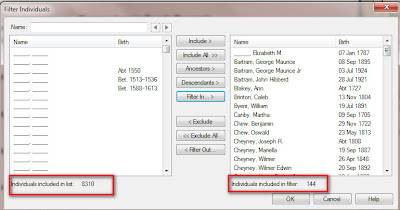 Because there are only a certain number of years available, we can then Filter OUT those who died BEFORE 1906. Clicking on Filter OUT, we'll select Death Date is Before 1906.

Down to 48 people, but there is no information for anyone who died After 1961. Filter Out again, where the Death Date is After 1961.

This gets us to the report to use for this record set for Pennsylvania.

Here is a piece of that report, where the names within the Red Box will use the Russell Soundex. 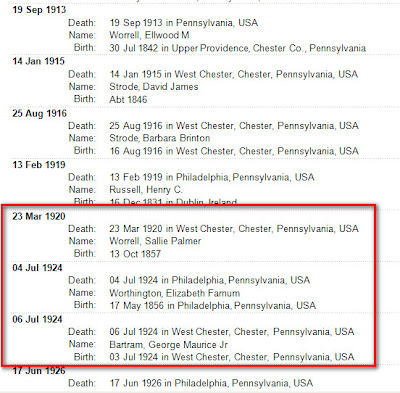 Of the 28 people on this report, I was able to locate 27 records. In most cases the data that I had, contained the correct Death Date, a couple contained a different Place Name, and found one record for a cousin what had been trying to locate birth information about her mother.  The place name differences, from what I can tell, without the actual record, was a much closer place of death. Other records showed the neighboring town, while these records showed the Township where the person actually. The town was the closest hospital.