In Finding John's Other Grandmother, R.A. (--?--) Collins in Online Resources my friend Randy Seaver had an open, or not quite confirmed, finding for the mother of Ruby A (Snearly) Collins.

Toward the end of his blog post he posted this:

There is no image for this record - it's only an indexed database.  But it provides a lot of very helpful information, including:
*  Name: Ruby A. Collins (Ruby A. Snearly)*  Birth Date of 20 May 1899*  Birth Place:  Ill.*  Death Date:  13 Nov 1922*  Death Place: Bement City, Jasper Co., Ill*  Death Age:  25*  Burial Date: 15 Nov. 1922*  Burial Place:  Hunt City, Jasper Co., Ill.*  Occupation:  housekeeper*  Race:  White*  Marital Status: M*  Gender: Female*  Father Name:  John Snearly*  Father Birth Place: Jasper Co., Ill.*  Mother Name:  Ruella C. Downey*  Mother Birth Place:  Ill.*  Spouse Name:  Collins*  FHL Film Number: 1557035
I looked up the FHL Film number and it referred me to the FamilySearch record collection for Death certificates for the state of Illinois, 1916-1945, excluding Chicago with the exception of stillbirths; index, 1916-1938; internet index, 1916-1950.  That referred me to the Illinois State Death Index website, which has less information than the Ancestry indexed database.  There was a link to the "Illinois Deaths and Stillbirths, 1916-`1947" database on FamilySearch, and the indexed entry there for Ruby A. Collins has the same information as the Ancestry.com indexed database, and also provides an item number and a certificate number.
What I don't know is if the actual Illinois death certificate will have more information than is in this index.  for instance, will it have the spouse's given name?  Obviously, I could write for an Illinois death certificate for Ruby A. (Snearly) Collins, but my conclusion is that this is "good enough" for this survey phase of my family tree climbing fun.
Subsequently, I have found John Snearly's parental family, and am stuck on the parents of Adelia (it's Adelia in the 1900 to 1940 census records and the Illinois Death Certificate Index and her Find A Grave memorial, not "Ruella") C. Downey.

I was reviewing my Conflicts, in my To Do List, and found this entry:

Is Adelia C _____ and Ruella C Downey the same person. If I don't know a name, I use the 5 underscores. It helps remind me of work to do, but in this case, based on Randy's blog post, I thought I would see if I could 'prove' Randy right (or wrong).

Here are my research notes for Adelia C or Adelia married to John Snearly or Snearley:

Was it Jno I, John, John O, John B; Snearly, Snearley. I think John O Snearly.

The only record I had on his Ruella C Downey, was that Illinois Death INDEX. Since I record what I find, I recorded on 24 Nov 2013 "Illinois, Death and Stillbirths Index, 1916-1947 - Rudy A Collins. That's when I made that entry on the To Do List.

I should be able to find some record on "Ruella", nothing. I then looked at Ruby A Collin's siblings as they had some unique names. Nothing on Ancestry at all. Then I remembered where I found Ruella and went to Family Search.org and found: 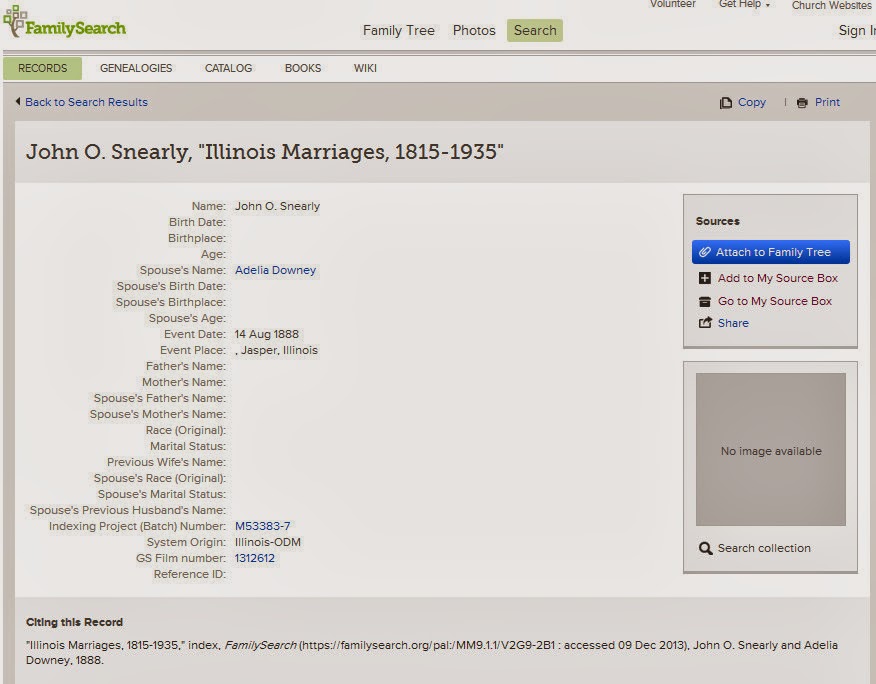 
John O Snearly married Adelia Downey on 14 Aug 1888 in Jasper, Illinois. Right time frame and right place. Yes, this is another INDEX and we can't write a proof statement based in an Index, but we know where to send John, if he is interested.

I merged my two people in FTM2014 and have uploaded my file to the AMT for Randy to share, if he chooses.

So, the Ancestry and Family Search Illinois, Death and Stillbirths Index, 1916-1947 have the mother of Ruby wrong, but the Marriage Index is correct. Ruella or Adelia Downey? I think Adelia is the correct name.

Email ThisBlogThis!Share to TwitterShare to FacebookShare to Pinterest
Labels: 2014, Genea-Musings