I am volunteer at a local Adult Care Community, where I "teach" them family research. I use FTM2014 and now the whole class (5 to 8) use Family Tree Maker, or at least those with a computer. Each active member of the class has given me a Family Group Sheet, or some information that they have about their family and I will work with that, do some basic research, then do some live research in class.

We have been through census records and talked about what information do they want to collect (for Family Tree Maker) and have given them a couple of interesting clues you can pick up when looking at that image.

This week it was a non-computer person's turn. His information got my attention because of where his family was located and that I saw two females in the chart with surnames as middle names, AND that I know those surnames. Right surnames, right location.

I found a Public Record Index that listed 5 locations where this person had lived. I showed the importance of the Map feature, as I did a Person view in the Map to show him where he as lived based on that record (an Index now less). His eyes lit up as what I found was right, and they all loved that the record nailed his locations.

There was a Hint on our "home" person for a 1940 Census Record. Right time, right place, so we looked at the image and talked about what to capture and who all was in the household. BUT the names we all different in the household. So we had a discrepancy. The name was listed as:

Surname, Initial, "middlename" as expected. So I nudged the home person, I thought your first name was Ralph. Here it says that your middle name is Ralph. The class looked and notice the 'known' first names were listed as the "middle" name.

I had the image blown up so they could see it, and I asked, is this a Census Taker problem or an Informant problem. What is unique about the 1940 census I asked? The informant was the Head of Household came out of the class. Who was that? "My father", was the reply.

Another class member asked me to scroll up the image a bit and his observation was "everyone" is Initial First, then the first name. 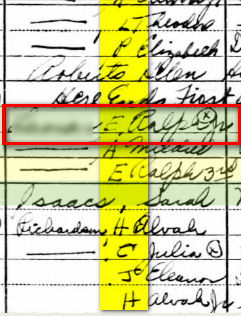 So, we have a conflict, right? Record what you see, right? Why not put this observation in the Name Fact Notes for this entry and use the Preferred Fact to be the "conclusion" or hypothesis for now and the Name Fact Note would reflect how the conflict was resolved.


Name Fact Note: In the 1940 Census, the entire page reflected Surname, Initial, name spelled out, where for this family, that name was the First Name. The census page was consistant in how the names were recorded