So, I continue to track William Knapp, in hopes of finding his parents.

The more I look, the question list gets longer.

Decided to use the Map feature, within the Places Workspace, and selecting a Person, rather than a Place to track William's Journey. Consider the Map: 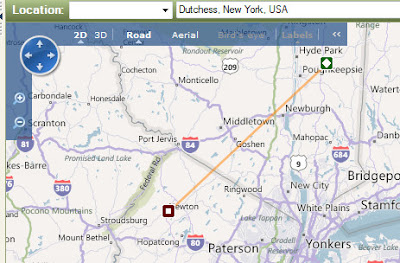 The record that have have found, shows that he was born in Dutchess County, New York. After considering that what is not Putnam county was also Dutchess County when he was born. It wasn't until 1812 that Putnam County was created.

Looking at where he was born, with the little detail that we have, and where he died, it's a pretty straight line between Dutchess County and Newton, Sussex County, New Jersey. In fact, there is a road that pretty much connects those two places. Along that road (Rt94) you'll pass through Goshen, New York on your way to Newton. Having driven that road, stopped at a couple of cemeteries, I found Knapp's along the way, with several large families in and around Goshen, part of my wife's ancestry.

But, now let's through in where William Knapp was Married. 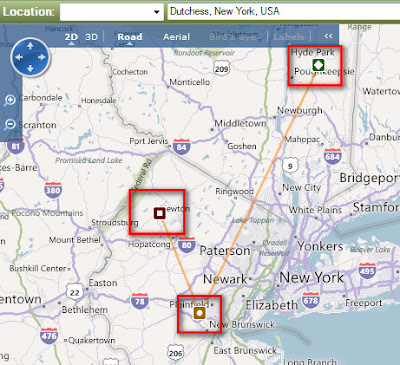 Again, this was generated by FTM2012, just added the boxes to see the three points a little clearer.  By car today, that would be about a 5 hour trip, mostly interstate. Remembering this is between 1775 and 1804, and adding a "what if" here, What IF "Dutchess County" was really closed to Poughkeepsie and there was more "commercial" boat traffic on the Hudson River connecting Albany, north of or upstream from Poughkeepsie down to New York City, or over to Newark or another New Jersey landing, what does that do? 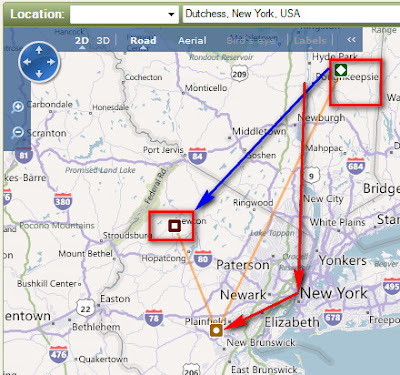 That changed the "distance" issue that was in my mind, back into reality. Another mode of transportation, the Hudson River, makes the trip so much easier.

OK, so far, just now need to find the reason for the move, remembering that he was a Shoemaker.

Lesson Learned: Use the Map feature to see the migration path of the person, or people you are researching. But, keep history in mind. I was stuck in the reality of today (car) verses the mode of transportation of the late 1700's in mind.