What I have learned, be it from importing a GEDCOM file, doing a Web Merge, and a TreeSync™ operation, a review of the outcome of these should be reviewed BEFORE moving forward. Especially if you have created your own "standards" on how you want information presented in your FTM database. I have covered many of mine on the Blog.

This one is very minor, but work posting what is seen and how to correct it. It's very simple.

Family Tree Maker allows for Abt, Bef, Abt, Bet, types of dates. I have mentioned before, that if I see and record a birth Year, from a census record, I prefer to have that presented as Abt. YYYY. Understanding that the recorded year is a "guess". The birth year may change over time for a person based on when the Census was taken, how provided that date, OR age, and how the census taker recorded it. In early census records, the Age was given. So the Calculator can be used to estimate the birth year. Thus Abt YYYY for my birth entries.

When doing a TreeSync, this is the observation, and I always check for.

It is showing ABT, as it is presented in the online AMT version of this same file. To date, I have only seen this ABT vs Abt for ABT and not the other options.

To change the ABT to Abt, globally, click on Tools, then Options 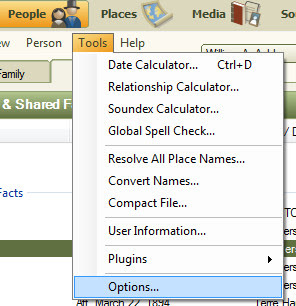 Then select the Names/Dates/Places tab. Then type over Abt with Abt. 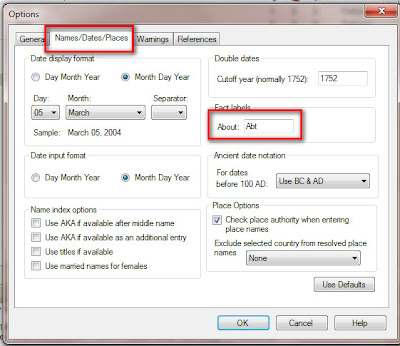 This will globally change the ABT to Abt within FTM2012.

Lesson Learned: Review your data after a TreeSync

This has been reported to the Family Tree Maker developers:

Email ThisBlogThis!Share to TwitterShare to FacebookShare to Pinterest
Labels: 2012, AMT