FTM2014 - The RAGU Challenge another view

Oh, we have a Challenge from my cousin DearMYRTLE. Please read about it in her blog.
Dear MYRTLE’s 3-2-1 Cite Genealogy Contest
April 2014 Edition
We also have a Video on what this contest is all about.
Click on this image to view the video

The above is an introduction to DearMYRTLE's April 2014 3-2-1 Cite Genealogy Contest. That and her early challenge about being bigger than your genealogy program got me thinking. Here is a link to my response to that challenge;

FTM2014 - Response to 'You are bigger than your genealogy program'


I want to see if FTM2014 is up to this newest challenge. This also gets to some responses that I have received about FTM2014. How can I use FTM2014 to meet the Genealogical Proof Standard? Working with the Mastering Genealogical Proof Study Group #2 hosted by DearMYRTLE, I have just discovered a feature in FTM2014 that has been in the program since FTM2008. What, 5 versions later I am just finding a feature? Yup, it's been there for that long. It's a hidden feature, at least for me.

Here is a hint about this feature.

That "star" is hiding the feature. I do know why it was hidden to me, because when it came out many, many versions ago, we just rated the source on a 5 "star" rating, which didn't mean anything for me.

Taking off from The RAGU Challenge blog post I did using Evidentia, I want to do the same thing in Family Tree Maker. I will click on that Star and see: 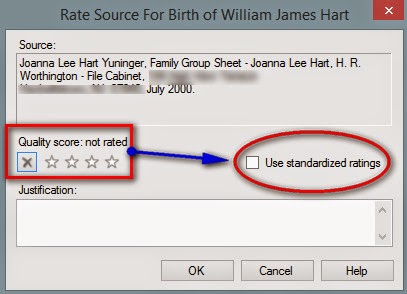 That Quality score is what I remembered, but what is this other box? 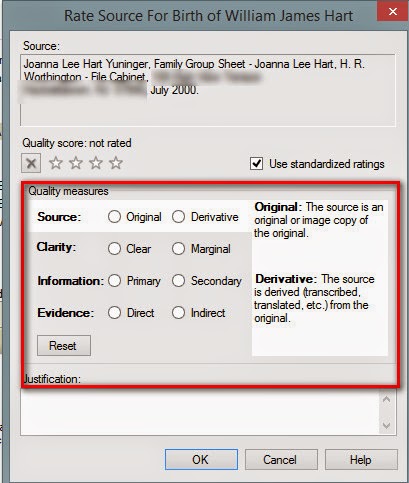 Wow. That looks like the same kinds of questions that Evidentia has and what the Genealogical Proof Standard talks about and what I get from reading the Evidence Explained website and Facebook Page hosted by Elizabeth Shown Mills, not to mention the Mastering Genealogical Proof by Dr. Thomas W. Jones. It's been hiding in plain sight all this time.

Let's see how this works.

The first question is about the Source. Is it an Original or a Derivative? The hints to what that means is on the right. 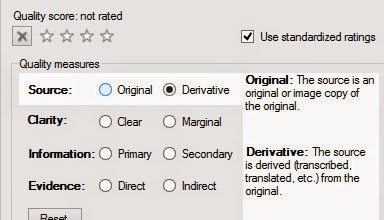 This first source is a Family Group Sheet which I think is a Derivative. That is the same at Evidentia
. 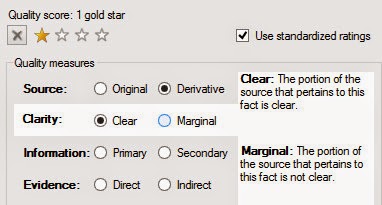 Was the document clear? I have not attached the image of the Family Group Sheet as it contains information on living people on it.

The Fact we are evaluating is the Birth Fact where the Information was taken from that Family Group Sheet. 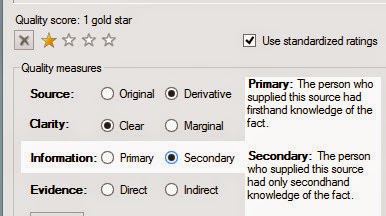 The person who created the Family Group Sheet was the daughter of the person being researched, so this would be Secondary Information. She wasn't there when he was born.

The information in the Family Group Sheet answered the question about when this person was born and where. 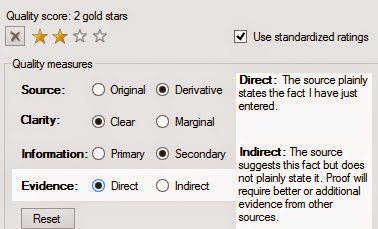 Here is what was in the report from Evidentia

The Joanna’s Family Group Sheet[1] asserts that Birth Date is 19 Jun 1914.
The source reviewed was an Authored work, introducing the risk of errors in interpretation. The information is believed to be Secondary (meaning the person providing the information received that information second hand, from another person or work). The evidence supporting the claim is considered Direct (meaning it adequate to answer the question directly).

Joanna Hart Yunninger is the daughter of Williams James Hart and recorded his birth date to be 19 Jun 1914
The Joanna’s Family Group Sheet[1] asserts that Birth Location was West Grove, Chester County, Pennsylvania.

The source reviewed was an Authored work, introducing the risk of errors in interpretation. The information is believed to be Secondary. The evidence supporting the claim is considered Direct.

Joanna Hart Yunninger is the daughter of Williams James Hart and recorded his birth place to be West Grove, Chester County, Pennsylvania

Why not copy and paste that information from Evidentia into that Justification field. 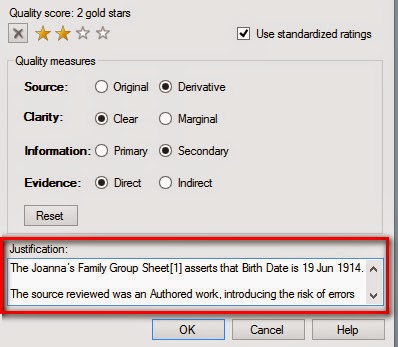 But did you see what happened to that Star Rating? It's a two star rating. Those stars made no sense to me before, as it would have been only my judgement. Now FTM2014 does that for me, and I think I have followed the evaluation of the information (claims) that was on that Family Group Sheet.

As I have posted before, I record what I see. Here is what I have for the Birth Fact

There are 5 birth facts. That first column of numbers (3, 2, 1, 1, 1) is the number of Citations for that specific information. FTM2014 then has us select the Preferred Fact. I'll not provide the details of each of those 8 citations, but there is some incomplete information, only the birth year, some with no location, etc. But it also has some conflicting information. Was he born in 1914 or 1915? Clearly in Pennsylvania. More specifically West Grove, Chester County, Pennsylvania.

The "abt" dates are from Census Records and a letter I have, the 19 Jun 1915 date is from an Authored Work.

So, my Evaluation is behind my choice of the Preferred Birth Fact.

I copied and pasted my Genealogical Proof Report, from Evidentia, into the Person Notes as seen here.

This report will be updated as the other 5 source documents were entered The conflicting information would be in the Evidentia file along with an update conclusion stating what I said about my evaluation of all 8 documents.

Going to the Publish Workspace and generating an Individual report we see:

They all have Citations as seen with the superscript numbers.

Here is the Source information that is included in this report: 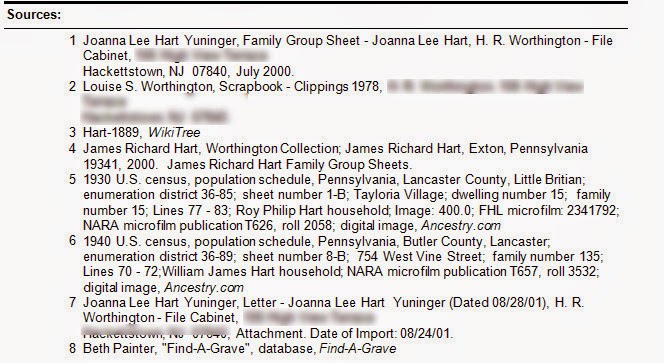 A portion of person notes show: 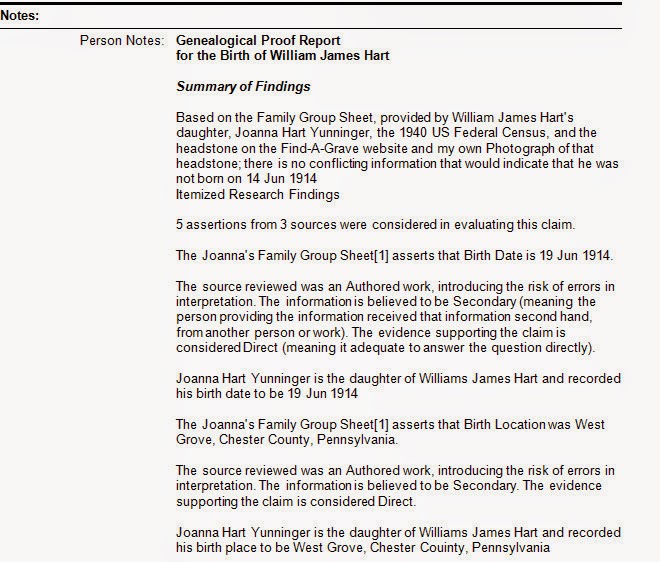 This is only an example of how working with both programs can help resolve some complicated issues. This was pretty simple, but using the features of both programs, I think can help document and help get beyond those "brick walls".

I have started to use Evidentia more and more with those situations where I am trying to determine if I am looking at two people or one person, or help resolve conflicting information. Like this case, take that source information and run each one through Evidentia to bring me to a Conclusion.

Finally, all of this information would then be sync'ed into my Ancestry Member Tree.