A couple of weeks ago, I showed how to generate a report for everyone I expect to find on the 1940 Census.

I have signed up and have done a couple of Indexing practice runs. We are go to go there. The focus this week around the Genea-Blogging community, a couple of Google+ hang outs, and the Genea-Blogging Talk Radio show this evening, we were encouraged to identify the Enumeration Districts for "our people". Remembering that the indexing won't be available to us for some time.

It was suggested that we go to Steve Morse's website

Once there, select US Census, then Unified 1940 Census ED Finder:

In my report I have the Street Address for everyone in the 1930 Census and in the Citation for that "Residence" Fact, I have the 1930 ED Number.

Going to the Steve Morse's website, I selected the State, County, and City, for those who lived within a city, and entered their street address.

It returned the 1940 ED Number. One cool feature, was that you can link to Google Maps, to actually see the street and where on the street the address is. I actually saw the street view of my grandparents house.

For me, I don't KNOW when they moved from the address in the 1930 Census, to the address where I know they lived in the early 1950's. This Census should help me with that. In addition, I may get that date a little closer when I see the 1935 information that may be included in the 1940 Census. 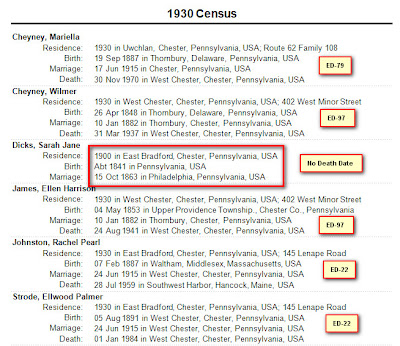 There was one person on the report that I don't have a death date for, so I am not expecting to find her in the 1940 Census, as I haven't found her since the 1900 Census.

I reviewed the entire list (1+ pages) and marked that a couple of people had died since the 1930 Census, and one couple got married after the 1930 Census. So my printed report has notations on where I expect to find them in the 1940 Census.

I am ready to go,

In the Blog Talk Radio show tonight, we heard that on Day 1, Delaware, Virginia, Kansas, Oregon, and Colorado will be ready for indexing. Day 2 will include Pennsylvania. So, with any luck, I will be able to find "my folk" on Tuesday, with out the 1940 Census being indexed. Links are ready, from what I can tell, on the Steve Morse's website.

Then I can get on with Indexing.
So, I pulled up my 1940 Census Report and took a look at it