As you may be able to tell, I am cleaning up my family file. I have had this same file since the beginning. This post will deal with my media files. All of those photographs that I have added to the file over the years.

One of the issues has to do with multiple copies of the SAME photograph, linked to the several people in the photograph. To have a starting point, I have 349 Images in my linked within my file.

Going to the Media Workspace, and scrolling down, I can see the same image appearing. For example: 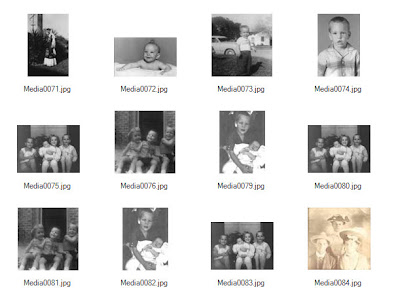 There are several images that are the SAME. Not to mention the "Media" followed by a number issue, which is a Filename Issue. I want to clean up both the duplication and the filename problem. I do have a filenaming convention that has been posted before.

By switching over to the Detail tab, at the bottom, there is a link from this Media file to the Media Tab for that person. All is good, so far. 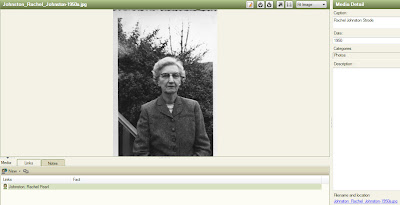 But, lets look at a "family" or group Photo. This is one of the photos that shows up 3 times in the Media Folder. Each with a different filename (by person media file), each linked to that person with the filename. The Caption is the same, so sorting by Caption (Tools, Option menu), showed the duplicates.

What I want to do now, is to Link this ONE image, to the three people in the photograph, and be able to delete the two other media files. Below and on the Left is the Links Tab, where New, Link to Person is selected.

Since I have the names of the individuals in the photograph in the Caption, I can now select the person from the list of individuals, starting by typing the surname, comma, then the first name, until the first name can be selected. 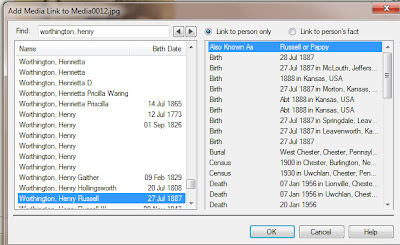 The options in the upper right at Linking to the Person Only, or to a specific Fact. I accepted the default of Link to person only, because I want this picture to be in the Media Tab for this person, and to be in this persons Gallery in the Ancestry  Member Tree. The third person is linked in the same manner.

Returning to the Media Workspace, Details, the Caption and Linked to people are the same.

Now to the Filename issue.

Clicking on the Media Tab, and selecting the Rename Media File menu item, the filename can be changed (renamed) 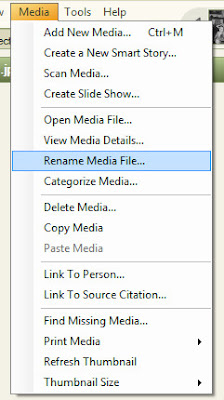 What I found that worked best for me, wast to use the Surname, of the Family, followed by the complete Name, in the order listed in the Lower Left corner (Linked People). In this case, the Date that the picture was taken is known, so I added the year to the filename. This way, if these three people appear together, in a different year, they will have different filenames, sorted by that year. 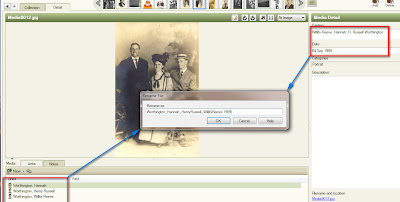 I have a number of Family Portraits. I use the same basic file naming convention, but I add the word Family_ to be beginning of the Filename. It's a reminder to me that it's a family portrait, vs members of a family.

The description field is a great place to put the names and where they are in the photograph and other details that you might have. 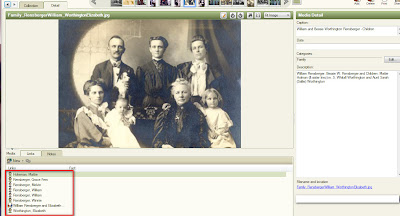 This one photograph is linked to 7 people.

By doing this process, I got rid of all of my Media-####.jpg filenames, and got rid of the duplicates that I had in my file. Went from 349 Media files down to 338, with no duplicates and each media appears with the person in the file, both in FTM2012 and in the Ancestry Member Tree.

NOTE: The Media filename came from the import of these images from Version 16, where all of the scrapbook items were within the family file.

Email ThisBlogThis!Share to TwitterShare to FacebookShare to Pinterest
Labels: 2012, Filenames