Earlier, I have posted how to generate a list of people you might find in the 1940 Census.

There is flexibility in how you can start with. This does NOT get into Where to find them, since the 1940 Census, initially, will not be indexed.

The next piece is the ability to update that list, by removing those you have already found.

To take this to the next step, as we find our ancestors in any Census, how about the report removing them from the list, once you have found them, without having to do anything but to run the Saved Report again.

NOTE:  When I find someone in a Census Record, I record that as a Residence Fact, with the Census Record Citation, as the documentation of where the person lived on that specific date.

Go to the Publish Workspace, Saved Reports, and select, for this example, the 1930 Census Record. This was created in the earlier blog postings. Selecting this Saved Report will bring up the list of people I had in that report. 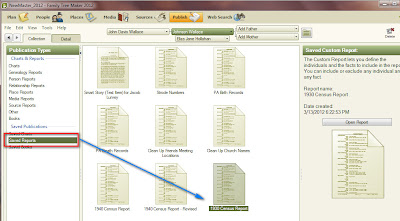 Below is a piece of the report just created. You will notice that there are already two 1930 Residence Facts in the report. One shows a Family Number, from that Census Record. But, I want that person not to show up in the list of people I am searching for in the 1930 Census.

Will now select the Selected Individuals Button on the Right, as we did earlier, with the Names still in the Left Window, we will now < Filter OUT, all Facts, and scrolling down to Residence, and select Contains. This is indicating that we want the Residence Fact that Contains, something. That will be defined next. 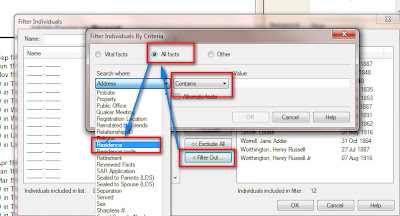 Continuing, Residence Fact that Contains 1930. Further, not knowing, nor caring at this point, the Alternate Facts box is selected. I normally select the most recent Residence Fact as preferred. But, for this test, that is not important.. 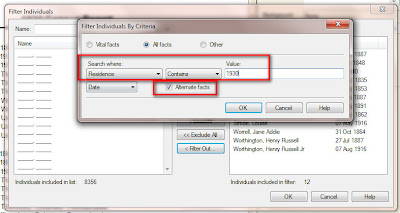 So, the resulting report showed that I only have 2 people to look for in the 1930 census. It should be noted, that this is my Direct Line. The earlier blog posts can then be adjusted to include others.

This was a test to see if I am ready for the 1940 Census. It worked so well, that I am using this same procedure for previous census years. The Adjustments for the Birth and Death Dates are changed based on the Census Year.

In working with the Filter In and Filter Out, and based on the data in my files, I used the Census Year, not the date the Census was taken. (01 April 1940).

The next task will be to identify Enumeration Districts for Browsing the Census Records when they are made available to us.