How to document a Relationship?

Warning: This is a work in progress.

A question that I see on the various Family Tree Maker message boards, is How do I document a relationship?

We have Facts that we record, with each Fact we Cite where we received that information from. Some of these documents reflect relationships. Within FTM2012 we have a nice Relationship view, in the People Workspace, Person View, and the Relationship Tab. 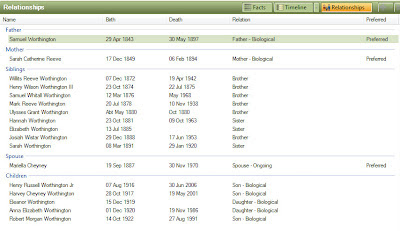 This is a nice chart and clearly shows us the Relationships, and the types of relationships between Parents and Children, and "Husband and Wife" (I will not address the issues surrounding those two terms).

Nice chart and pretty clear. BUT, how did we get there. Of course the answer is within FTM2012.

The issue is, how did WE get to the relationship "conclusion" or how do we record that.

In a project I worked on, I used the Name Fact to record what the various sources told me about this person, and other people.

You get the point. I put these notes in the Preferred Fact.

This worked pretty well. But I started this before we were provided the ability to Print Notes, including Fact Notes.

During my clean up of this file (this file started in Version 3.4), using FTM2012 for clean up, I have many more options, so how best to do them, and address this relationship documentation issue.

How about using Fact Notes?

The advantage now is, that the Citation is one tab away, on the selected Fact Display (right hand panel in the Person View.

Remembering when Census Records really spelled out relationships, besides being "in the household" I decided to record the make up of the household, in the Residence Fact Notes page. 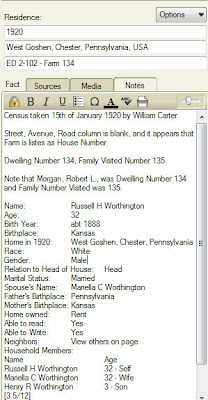 OK, that works for me. Again, the Citation is two tabs to the right, and IF I want to see the Census Record, it is in the Media Tab. This works for me.

There are other records the show relationships, so I put them into the Fact Notes. I have been moving (Copy/Paste) old information from the Person Notes field, into the more appropriate Fact Notes field.

This has a bonus feature. For example, I don't want Social Security information "out there" so I can mark that FACT as Private, so no one can see that fact nor its details, but I can see them.

Keeping with the Census Record, comparing two census years for a household, that is the selection of a different Residence (fact) Year. It's visual, but it has worked for me.

As I try to point out, "but what does the output look like?". Hier is the Publish Workspace, Pction Collection, Notes Report options. 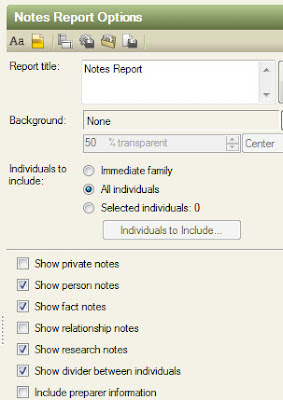 In an earlier blog post, I mentioned the Research Notes, that can be seen above.

There is one more advantage, that I learned earlier, is the Notes tent can be seen in the People Workspace, Family View, for the selected Person. 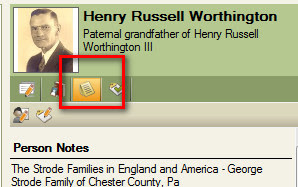 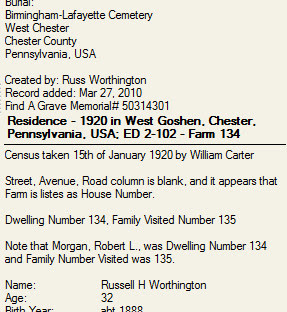 So, I can SEE all of the notes for that person in the Family View.

This is still a work in progress, but it's the direction that I am going.

Email ThisBlogThis!Share to TwitterShare to FacebookShare to Pinterest
Labels: 2012, Relationships