The 580 patch added a new feature:

Fact Merge: The ability to merge multiple instances of the same fact type for an individual.

For example: I have to 1888 Residence Facts that are the SAME. Both with the SAME Citation. This new feature will resolve this. 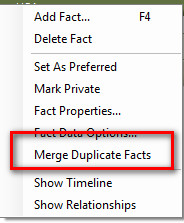 A New window will appear. The list of Facts are in that Window. To SELECT the Two Facts to Merge, select the first one, hold the CTRL Key, and Select the second Fact to be merged.

The "Next" button will become active. Click on that, and a view of what will be merged will appear. 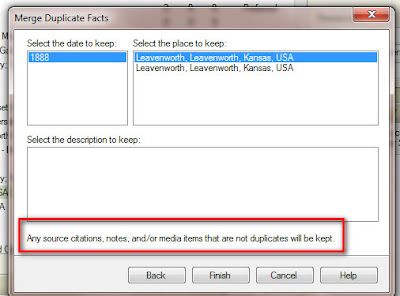 Its important to read the note that is within the red box. "Any source citation notes and/or media items that are not duplicates will be kept". So, by merging these duplicate facts, no data will be lost, if one of those Facts had some notes or media file associated with the citation.

Email ThisBlogThis!Share to TwitterShare to FacebookShare to Pinterest
Labels: 2012, Facts_Duplicate