Genea-Blogger Randy Seaver put up a blog post on Legacy Family Tree 7.5 and a feature he learned about:

Without going into details, I had not found William Knapp as head of household, and in the pre-1850 Census, could not find him. The only clue was that he may be been living in another household. I had suspected that he may had been living with 'in-laws', but couldn't find enough details to prove anything, it was just a theory to follow up on.

Here is where the Time Line feature of FTM2012 came into play. Going to the People Workspace, Person View, there is a TimeLine Button. 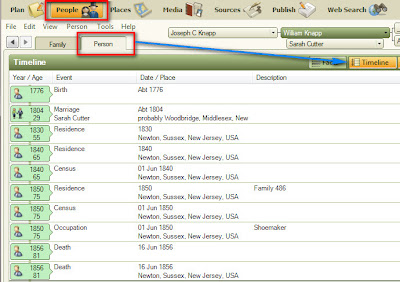 There are two other options for the TimeLine Feature. Show Family Events, and Historical Events.

Not sure that historical events has an impact here, but what was happening within his family. 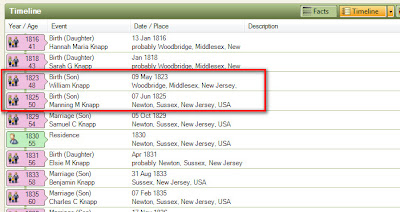 This is showing, and some Family Events above what is here, show that he had children born in Middlesex prior to 1823, then the children were born in Newton, New Jersey. Nothing clear, just that something happened.

Since there is very little information about William Knapp, and the his wife Sarah was from Middlesex County, and that there was some guessing that they may have lived with "family", I looked as the Time Line for Sarah'a father. 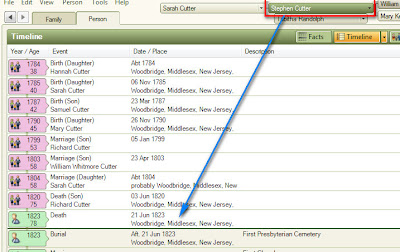 Clearly he was in Middlesex County, but he DIED in 1823.

So, the next hint for the move from Middlesex  County to Newton, may be caused by the death of Williams' father-in-law.

I am still looking for documentation to back this up, but the TimeLine feature of FTM2012 provided some clues.

Email ThisBlogThis!Share to TwitterShare to FacebookShare to Pinterest
Labels: 2012, Time_Line