On to the People Workspace, Person View. Just want to see what is in the Home Persons record. As a review, the right side of the list of Facts, are 3 columns of Numbers. The first column is the number of Citations for that Fact. The second column indicates if that fact has any Media Files, like an Image of a Census Record. The third column indicates if there are any Notes for that Fact.

What is Missing, here for me, is that there is no indication about who provided me with this file, the Facts that were provided in the file, so that I can see later, what I provided. In this specific person's file, there are a couple of Zero's in that first column. It may be that a Citation was not put the Name Fact, or Sex Fact. Not important at this point.

Two other issues, and they are only issues for me, is the Birth Date being 1775, and the spacing in the Person Notes at the bottom of the screen.

When I see Year Only Dates, I choose to make that Abt. YYYY, or Abt 1775 in the case. This becomes a little more important, again this is for me, to see Abt dates for Birth, Marriage, and Death Dates.

The extra spacing in the Notes aren't very important, but they will in the future. That spacing, from what I have seen, is caused by the construction or reading of the GEDCOM file. 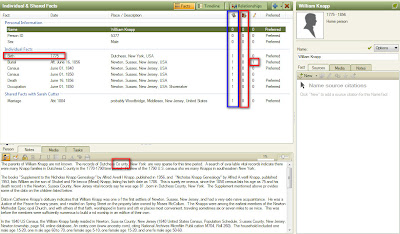 Add a Source of the person who sent me this file, and a Citation for Each FACT that is included.

Add "Abt" for Birth, Marriage, or Death Dates.

Clean up the Spacing in the Notes for Individuals with Notes.

I blogged about the ToDo / Task list already, but for this series, I'll be more specific for this file.