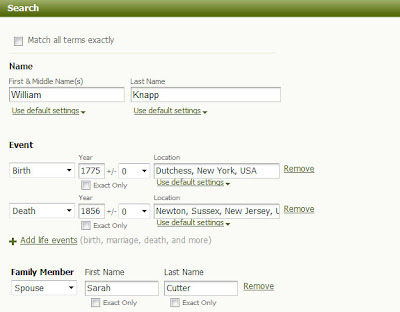 Bottom Half of this screen. 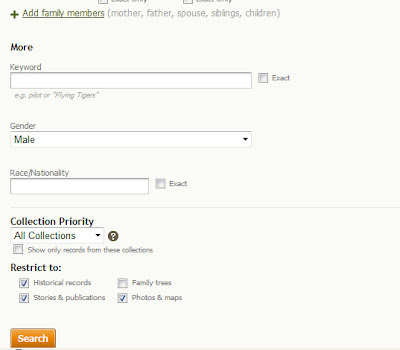 I mentioned in the first of these Blog posts, that the "Restrict To:" settings, just above Search, is what my "default" search settings are. They can be changed depending on what is being searched.

I then clicked on Search and found this set of results. 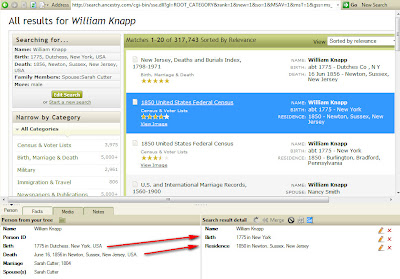 This time, I received additional "hits" / Hints, including the 1850 Census Record for William Knapp. Reviewing my data (lower left panel) and the census record data (lower right panel), it looks like the right William Knapp. But let's look closer. 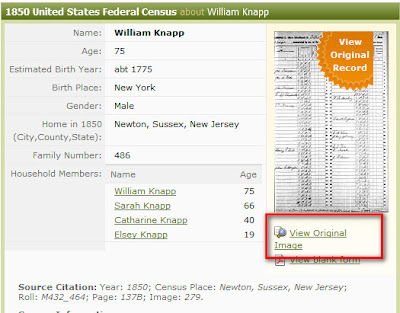 Still looks right, including his wife, Sarah. But we picked up some more data. Sarah was 66, and two of the 11 children, Catharine aged 40, and Elsey aged 19. In the 1850 Census we don't know the relationships. I'll add a ToDo item for Elsey, as show would have been born when Sarah was 47. This time, we have an Image that we can look at for more details, if there is any.

Looking pretty good. William is listed as a Shoemaker, but there isn't much new information in the 1850 Census to capture for the file.

Will go ahead and merge this new information into the file. There wasn't much information that was to be added in the Web Merge, but the Summary Screen has the fact that there IS an image (Media file) for this record.

A note: If you have a Filenaming convention, as I do, you are given the option to Rename the image. Clicking on the Rename link will bring up a window that will allow you to rename the Media File. After this media file IS added to the Citation and into the Media Workspace, I'll add the Caption for this image. 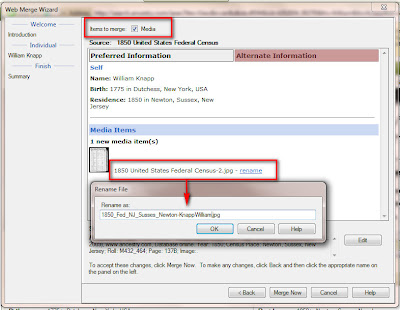 After the Web Merge is complete I sent back to William Knapp's page, and checked the new Fact (Residence) for him. In the Right Hand Panel, is a Media Tab. Clicking on that will allow you to see the Citation media file. Very handy for going back if you have any question about the data that you are entering. You will notice a "1" in the second column on the Right. That is the indication that theee is a Citation Media file linked to that Citation.

I have found that, over time, tracking of Family Number, Household Numbers, come in handy when evaluating "the neighbors" or other family units in a specific location.

I now have two To Do items (Tasks). For Sarah, it appears that she was still alive with William died in 1856 and that I had indicated that by using Aft 1856 for her Death Date. BUT, I want to follow up on that. Clicking on the Task button, for Sarah, in the People View, I add a Task. I added another Task for Elsey Knapp to see if she who her father and mother were, is it appears that she may not be Catharine's sister.

As a reminder, the Complete Task list is in the Plan Workspace, with the Name, Task, and Category of the Task. 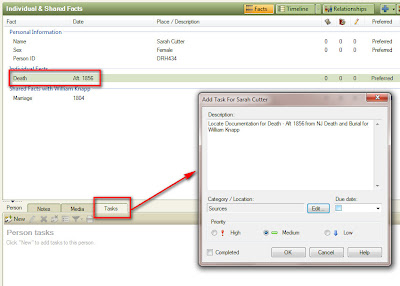 So, where do we stand at this point? Here is the Family View (People Workspace) as we know it at this time.