A couple of days ago, Ancestry.com had a Webinar on Military Records. I have been tracking down a Civil War relative and have created a file, specifically for he and his ancestors. It was not clear when I started this research that "he was one of mine". I only had a Name, Ridgely Howard, and a place, Culps Hill at the Battle of Gettysburg. I have, in fact, determined that I am related to him. What wanted to do, was to create some sort of story on the 2nd Infantry Regiment, Maryland. I have a couple of books on this outfit, but how to use Family Tree Maker 2012 to reflect the story of this regiment in the Civil War. The Webinar reminded us that they had Regimental Records online. In my research, for Ridgely Howard, a lot of the Civil War records were on Fold3.com. What I had not seen, was the records on this regiment on Ancestry.com.  This is what I found there. Just what I was looking for, a time line of the Battles that they fought in the Civil War. 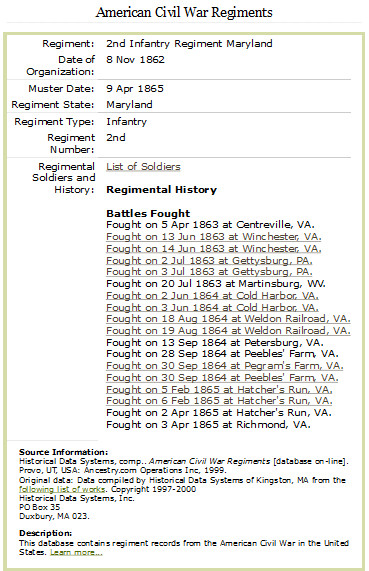 So, I created (People, Add Unrelated person) a Person in FTM2012 called the 2nd Infantry Regiment, Maryland. I used the Military Service Fact, to capture the Dates, Locations, and Battle, if appropriate, for each event or fact.

From Ancestry, there were write ups on some of these battles. From those write ups, I created SmartStories™ for each of those battles. I used the Caption of the Media File (SmartStory) to make sure they were in the order of the battles.

Below is the People Workspace, Person View for the 2nd Infantry Regiment Maryland. 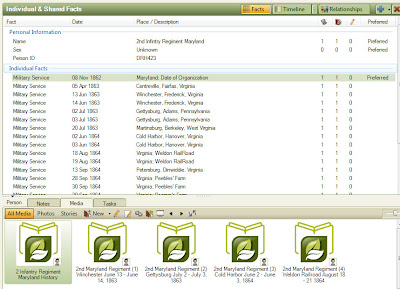 In the above screen is the Media tab, where a New SmartStory can be added. Clicking on the New, Create Smart Story, a dialog box will appear. For the SmartStories of the battles, I used the Start with Blank Page option and was able to Copy and Paste the details of the battles. But for this post, I wanted to capture the Timeline of the  battles, so that it will appear in the Ancestry Member Tree for this regiment in the AMT. I selected the default, Auto populate Smart Story. 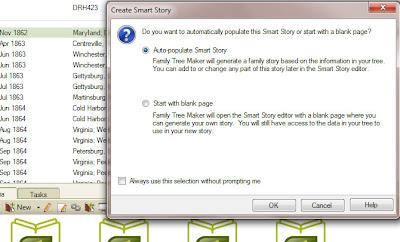 In the Right Hand Panel, of the SmartStory is what information that I wanted in the SmartStory. In this case, I wanted all of the data to be included, what was only the Military Service Facts. 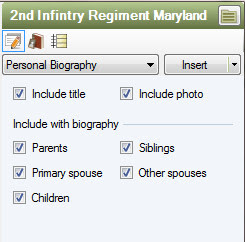 This is the un-edited list of Facts that were populated for this "person". 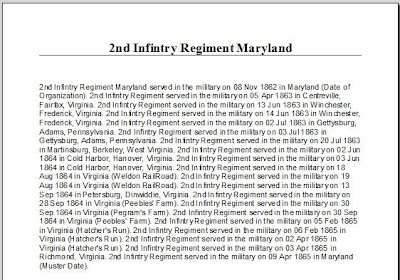 I have discussed how to use this feature before.

Posts on the SmartStory feature

As you move your cursor over the text, you will see what can be edited and what can not be edited. In the example below, the Date is hi-lighted. 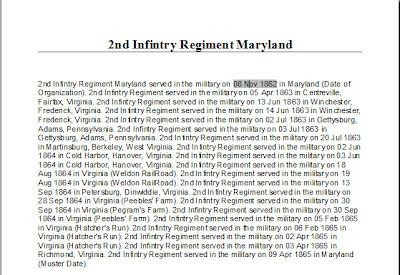 After doing some editing, this is the SmartStory that was created to reflect the Timeline for this Civil War Unit. 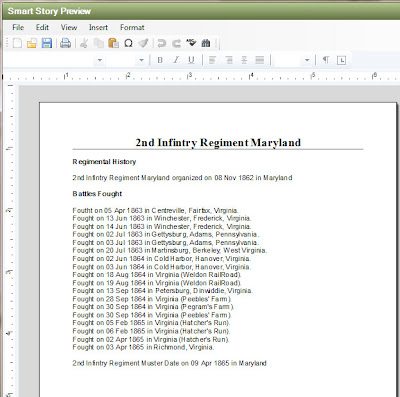 The Timeline button, in the People Workspace, Person View would look like this. 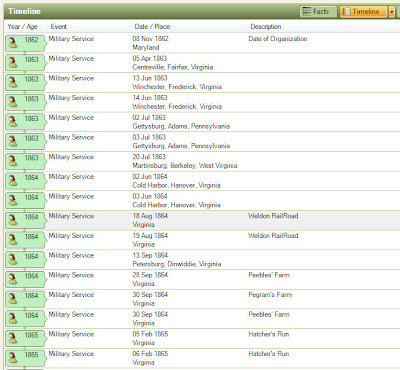 The point of this, for me, was to have a view in the Ancestry Member Tree, and in FTM2012, an overview of this Civil War Regiment. When reviewing my Civil War hero, and his dates,  I have a good idea what battles he fought in.

He enlist on August 21, 1862, but into the 1st Regiment Maryland, so would have been in the initial organization of the 2nd Regiment. He was wounded on July 3, 1963 at the Battle of Culp's Hill. This would have put him at the battle of Centreville and Winchester, Virginia and the first day's battle in Gettysburg for this unit on July 2.

He missed the Battle at Martinsburg, but returned to the battle at Cold Harbor, Virginia.

He was wounded on the 2nd date's battle at Weldon Railroad, Virginia and would be out of the rest of the war, as he lost his leg in Weldon Railroad battle.

Email ThisBlogThis!Share to TwitterShare to FacebookShare to Pinterest
Labels: 2012, SmartStory