Sons of the American Revolution

How do I track a SAR Application in Family Tree Maker?

A question I haven't seen asked, but I have found a number of these records for a specific line in my family. So, I figured out what I wanted to capture and what the Output might be, if I or someone else would want to apply. I don't know the rules for such an application, but only know some of the valuable information that are in the existing application. Based in the applications, could I generate information for an application.

I created three new Facts for my File:

What I wanted to capture for each person named in the application is these three items. I look at more for those who are named in more than one application.

The application number in this example is 91617. Wilfred Wason Blunt was applying as a descendant of John Ross Key. In the 1st column on the right is the number of Citations, which would be this application, 3 in the second column, indicates that there are three pages of Images from that Application and can be found in the Media Tab on the Right.

This may be overkill, but since I was trying to read the information on these forms, (very poor image in this case), I might as well document for each individual that I found along the way. In this case there were 14 people with dates, some I had and some was new information.

At the end of the data input, I created a Descendant Chart between John Ross Key and Wilfred Wason Blunt. 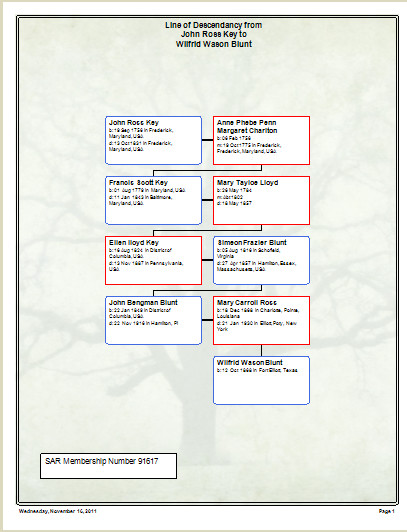 Email ThisBlogThis!Share to TwitterShare to FacebookShare to Pinterest
Labels: 2012, SAR