Yesterday, I posted a Blog entry on the Timeline Feature of Family Tree Maker. In reading a Genea-Blogger friend's blog, Bill West put this challenge out to us.

I used the timeline feature last year, when trying to find the Parents of a Civil War ancestor. His name was mentioned in a PBS series of Gettysburg. Over the course of a couple of months, I found out who his parents were along with a lot of other interesting pieces of information about this soldier.

One of the Finds that I found was the history of his unit.

Since that article listed all of the Battles that the 2nd Infantry (CSA) faught in, I thought that I would enter it into Family Tree Maker, so that I could track what battles he fought in, and what battles he was NOT in. As it turned out, he was wounded in Gettysburg, but returned to be wounded again about a year later in another battle.

In the link above, listed the dates and places of the battles. That entered, here is what the timeline looked like. 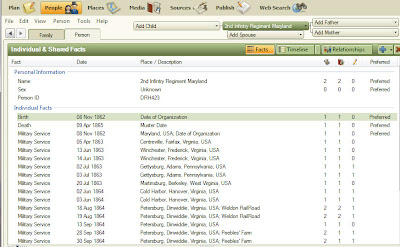 Using the Timeline Report (Publish Workspace), Person Collection, the two battles are there and based on the information on this soldier, I made a note as to his two woundings. 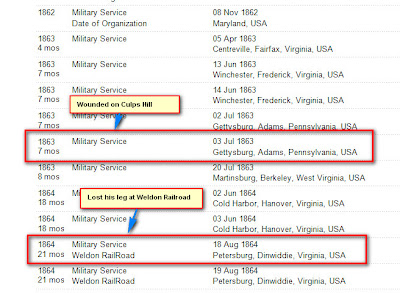 How was this done? Simply created a New, Unrelated "person". To be able to show how long the Unit has been in place, I added a "birth" and "death" fact, for the unit, as the Organizational Date and Muster Out Date. That would tell me that he was wounded during the 7th month that the unit had been established and again at 21 months.

Looking at this soldier's Timeline, we see that he had enlisted into the CSA before his unit was formed, at the age of 18. He was wounded at 19 (the first time) 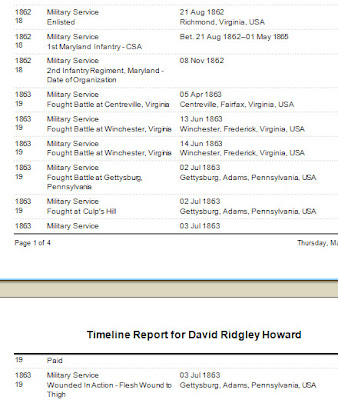 Looking down the timeline a little further, we see the 2nd wounding and his final "retirement" from the CSA. His Civil War Record showed that he was absent on August 14 because he was in a hospital in Charlottesville. Returned to Duty September 1863. 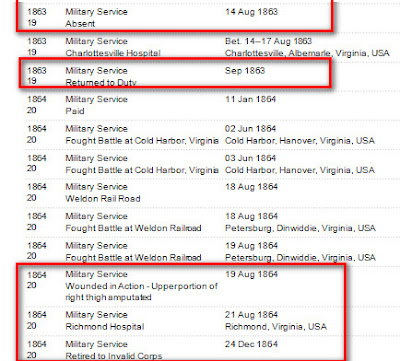 The on August 19, 1864, he was wounded "in action" where the upper portion of his right thigh was amputated.

Email ThisBlogThis!Share to TwitterShare to FacebookShare to Pinterest
Labels: 2012, Civil_War