I finally had an opportunity to try out a new feature in FTM2014 that I hadn't tried before. Copy and Paste a Fact.

In my recent post: Recap and What to do with Comments I mentioned that Randy Seaver had posted a comment that I had my data wrong. He was absolutely right (of course). So I went searching for the error of my ways with very little luck. He provided me with the Name of the person that I should have as Berl's wife in 1920. I found her family in the right area at the right time, but couldn't find Ruth A. Then I remembered that census record as having something strange in it. When I found what might have been Ruth's family, all of the names were initials and NOT full names. For example Berl was listed as B E. I went back to my Citation for B E Collins in that 1920 Census Record and found R A. So, I had the Data all of the time, just entered that data to the wrong person.

I had R A Collins listed under Mamie L, Berl's wife from the 1920 Census.

Looking at the Citation, I saw the list of Facts linked to Mamie and knew that I had a number of them. Now how to get that data over to R A Collins. That's when I remembered the Copy / Paste Fact feature.

I created a New spouse for Berl with R A Collins as the name, with NO Citations. I just made that relationship. The Census will do the rest.

I went down the list of Facts, on the Person Tab of the People Workspace, for Mamie and found a 1920 Census that was linked to a Fact. I RIGHT Clicked on that Fact and Selected Copy. 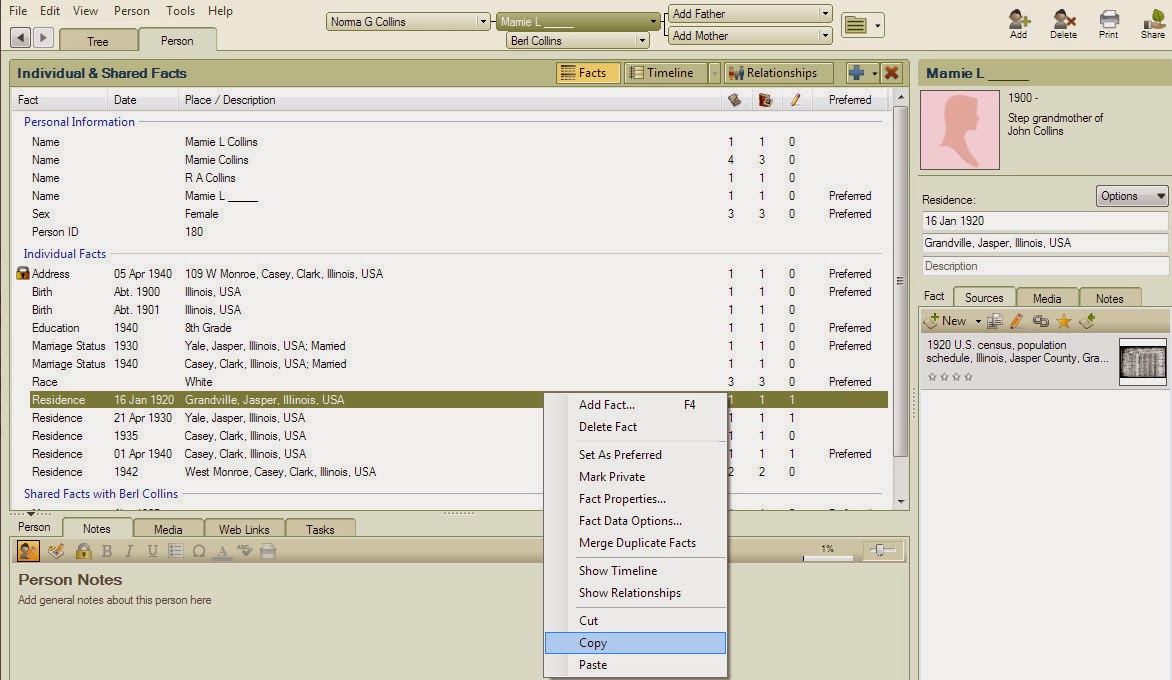 This will copy that Fact with the linked Citation to the Family Tree Maker clipboard. I then changed spouses from the Mini-Navigation bar at the top of the screen and selected R A Collins.

(You may see other entries in the next screen, as I had started to hand enter information when I remembered the Copy/Paste feature.)

Select anywhere on the screen, Right Click and selected Paste. 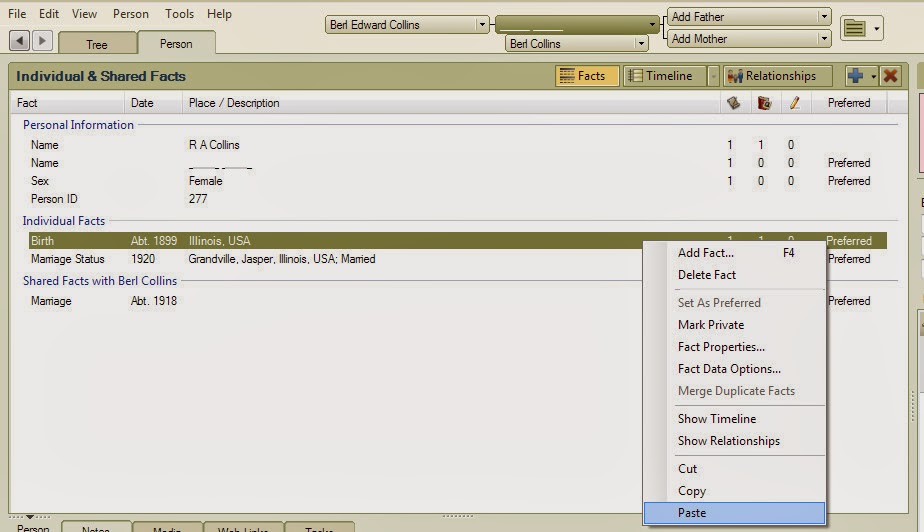 This will bring up a new window asking where do you want to Paste that information.

The window shows what you have copied, and allows you to Select what person you want to Paste that fact to. 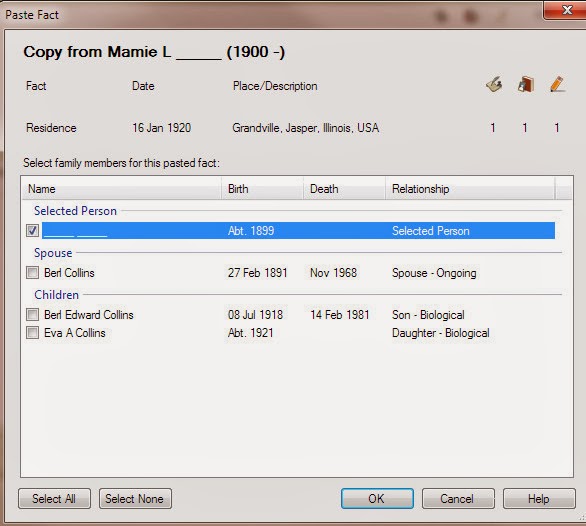 Randy had already pointed out that the first 2 children I had shown earlier were linked to the wrong mother. The above screen shows the Husband / Father and those two children.

Also note that there will be One Citation, One Media File AND One Note. I record the household from the census record for each person in that household, so that information is brought along with the Citation, as it should be.

The paste is complete.

I didn't do a Cut and Paste but a Copy and Paste, because I wanted to verify that it works as it should. So I went back and Deleted that Fact from Mamie. 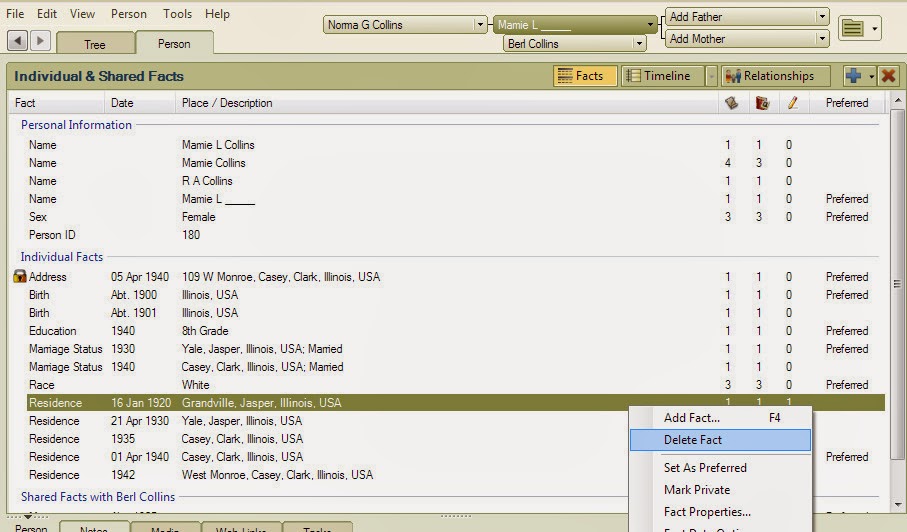 I did this for all of the Facts for R A Collins including adding a Citation to R A Collins, who I created earlier and I added a new name fact of R A _____ with the 1920 Census. Now I can go back to searching for her birth Surname, which Randy already provided, but I want to find that on my own.

The update is complete. 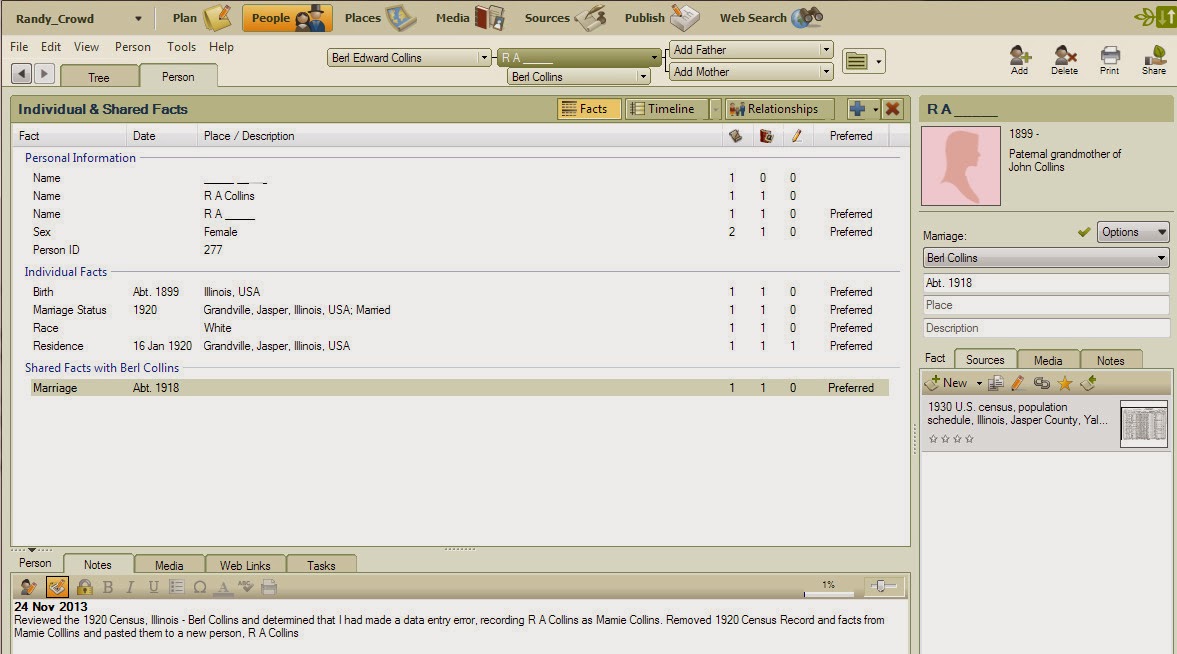 I made the following entry in my Research Notes:

Reviewed the 1920 Census, Illinois - Berl Collins and determined that I had made a data entry error, recording R A Collins as Mamie Collins. Removed 1920 Census Record and facts from Mamie Colllins and pasted them to a new person, R A Collins

The same research note is in Mamie's record as well.

Email ThisBlogThis!Share to TwitterShare to FacebookShare to Pinterest
Labels: 2014, Facts_Copy_Paste