A way to track Relationships from Census Records

I have been working on a project, where I started with a Name and place of a person and he was a Civil War veteran. My goal was to determine who his parents were, then to extend that back to a Revolutionary War soldier. The problem is that his surname was very common in the area where he "was from". Finding him in the 1850 Census Records might have been simple, if the information I has was is FIRST NAME, but it turns out that the name I started with was a middle name. but that's another story. What I was looking for was a way to track relationships, starting with Census Records but can be expanded to other records that we might find along the way.

For this task, I thought about making use of Fact Notes.

In this case, these are My Notes, but I do want to be able to see and print them. What I decided to do, it is use the NAME Fact Notes.

The example here is the Name information for David Ridgely Howard. You will see that I have found his name reported a number of different ways, which is why I wanted to figure out how to make sure I had the "right guy".

Below, is from the People Workspace, Person View. On the right side of the Fact list are three columns of numbers. I have talked about them before. It's the 3rd column that is of interest here. It has the number 1, meaning that there is One Note for the Name (Preferred Fact).

If the Note tab isn't displayed, there is a setting in the Tools, Options menu so the Notes tab will be displayed.

Thinking about the Output of the Notes, I chose to use a bullet list for the various entries. 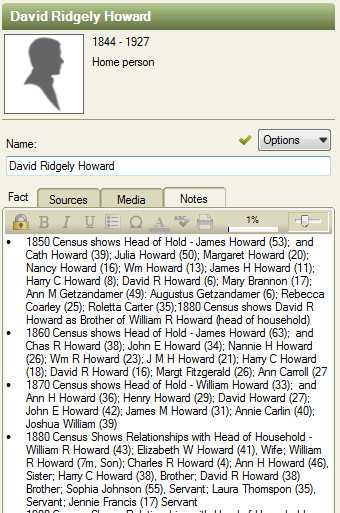 For every name listed in the 1850 Census, that same information appears in the Name Fact. It has the Head of Household, his name and age, followed by everyone else in the household and their age at the time. Remember, I don't know the relationships, yet.

I created a "standard" format for each Census Record year, as the information would be different, where it wasn't until the 1880 Census where those relationships would show up, but the 1850, 1860, 1870 Census records had Ages listed.

I used, for example, the following for recording this information.


For output, I created a Custom Report to show this information for review later. 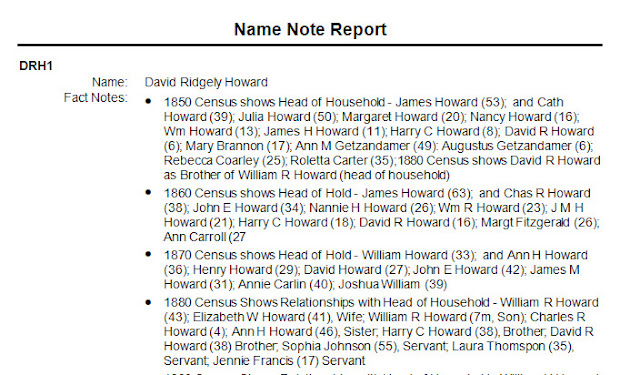 The DRH1 is the Person ID number that established for this file, another feature of Family Tree Maker.

Note: That over time, as the name is clarified, I will Cut and Pasted this Note to the Preferred Name Fact. In this case, the notes started with the Ridgely Howard Name fact, but after I found additional information it moved to where I have his complete name, David Ridgely Howard.