With the flurry of 1940 Census activity, I thought I better "see how I am doing". I set out to capture some major information on everyone in the 1940 Census, at least on this initial series of information gathering.

What I wanted to capture, was the Education Level, Marriage Status, and Occupation, along with the Residence for 1940. I have also capture the 1935 Residence Fact as well. But, I wanted to create a report to make sure that I did.

I went to the Publish Workspace, Person Collection, and Custom Report. Selected the Items to Include ICON (Right Hand Panel, left ICON), and selected Name, Birth, Marriage, Death, Residence, Education, Marriage Status, and Occupation. Each Fact, had Preferred Only selected. The Sort Order was by Residence, and Residence Description. 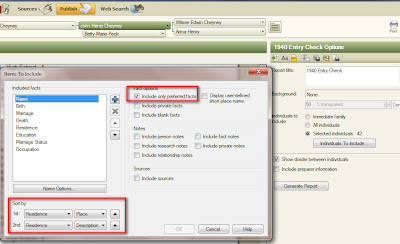 What this does, is to keep households together. Any missed "preferred" fact would show up incorrectly, or missing.

I know that the Occupation Fact was not always in the 1940 Census, but the others were.

But Why .... (you didn't ask) would I want the Marriage Status fact. Since it is recorded, I wanted to capture it. This report has shown up some database errors that I may have missed in the past. With this report, I can see the Marriage Date AND that Census Year's Marriage status. That would point me to a database entry issue, or something to follow up on.

Now to identify who would be in the report.

Selecting Specific Individuals to Include in the Right Hand Panel, I selected All Facts, and Residence, Date, Equals 1940, and did not check Alternate Fact. This will ensure that I only have people in the report, where the 1940 Residence Fact is Preferred. 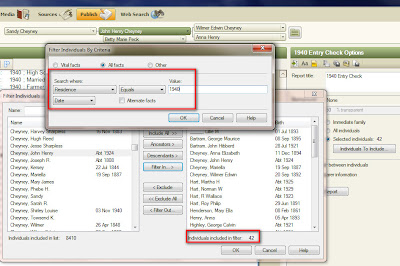 The Preferred Fact can always be changed later. But I wanted to track the 1940 Census. Changes in these settings can be done for other census years.

What this tell me, is that I have found 42 people in the 1940 Census, data entered, and now verified, so far.

The report is clear, to me, that I have captured what I wanted. This person lived where I had expected him to be, had 1 year of collage in 1940, was still single, and worked for Philadelphia Electric. He would later marry my aunt.

During Data Entry, I found some household where people were not listed. So, I created a To Do / Task as I was doing the data entry. So, it is growing.

Back to more research.