Which Citation ?? - a trick

Some colleagues on FaceBook presented a problem they were having with Family Tree Maker and Selecting an Existing Citation. (my understanding of the issue). Believe me, I understand, especially when dealing with Census Records.

You know you have an Existing Citation for the 1920 Census, in Chester County, Pennsylvania. You realized that you miss entering a fact from that record, know that you created the Citation, and want to link to it.

For my example: I forgot to enter the Residence Fact for this person. I entered the data, but now I want to "Link to an Existing Citation:. I am in the People Workspace, Person View, and just added the Residence Fact, for this record. You can tell that there are No Citations, nor media files because of the -0's in that first column of three numbers AND with the Source Tab selected on the Right, there is no Citation.

Selecting the Down arrow, to the Right of "New", the Use Existing Source Citation option is selected. 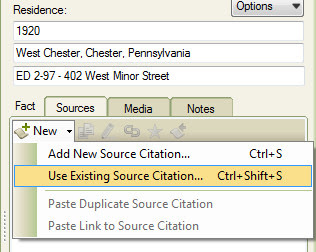 Selecting that option, a new screen is presented. It's much like the first screen in this blog post. I think that trick here, is to NOT use the Default Setting, of All Source Citations, but select the 2nd choice of Source Title. With the All Source Citations, default, choice all of your Sources are in the Right Column and you can't see the Citations at all. 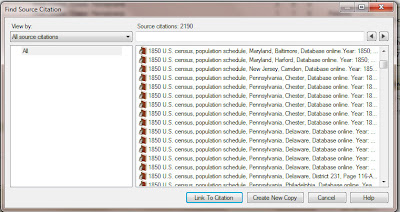 Looking at the data in the Residence Fact, I am working with a 1920 Census Record for Pennsylvania, Chester County, and the "ED 2-97 - 402 West Minor Street" and the Head of Household, Wilmer Cheyney.

With the 1920 Census Source, for Chester County, the list of Citations are in the Leftt Panel,

Selecting 1920 Chester County on the Left, will bring up all of the Citations for that county. The bottom Citation is for that Fact.

For me, it was easy to spot, but looking at what information was in the Residence Fact, having the Sources in the Left Column and Citations in the Right.

Making that choice, will now put the Citation where it belongs. 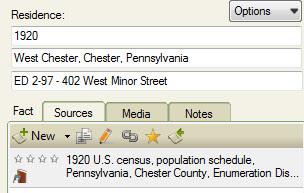 Lesson Learned: These Sources are using the Census Template, in FTM2012, by Census Year AND Location. I chose to use that option, instead of the Census Year only, so that the list of Citation by Source was reduced. Yes, there are more Source, but that turned out to work better for me. I had it the other way (Census year) and had pages of Citations. This just worked out easier. The Template feature is very helpful for me.