I have talked about preparation for the 1940 Census, and as I have worked with the Census Images and the Steve Morse website, I made a couple of adjustments to my reports.

The key, was to have the 1930 Records in good shape. Using the editing features within Family Tree Maker, I was able to do the following:

This give me a paper report to take to the Steve Morse website. My way of doing this is to use the Residence Fact to record the location information from the 1930 Census AND making that 1930 Residence Fact as the Preferred Residence Fact.

The Census YEAR is put into the Date field. I did look at entering the Date that the Census was actually taken, from the Census Record. But for reporting purposes, just the Year (YYYY) format was the way I went. IF there is questions about birth dates where the Age, as reported in the Census Record and the "Abt" birth Year comes into question, the date can be seen on the Citation Media file (or Census Record).

The Place Name, is in the same format that is taken from the Census Record. That is Town/Township, County, State format. This does two things. Allowing for the use of the Map and for consistency in the Place Name for sorting purposes.

The "magic" is in the use of the Description field for the Residence Fact. The Unified ED Finder Tools on Steve Morse's website cause me to change, a little bit, as to what was in that field. Two things were needed. Street Address and Enumeration District Information.

I had, for the most part, the Street information, or at least as much as was provided from the 1930 Census Record. Since the key for sorting of the report, I chose ED information followed by the more detail or street information.

As the example. So all of my 1930 Residence Facts are now in that format. Remember, at this point, I am trying to have a tool to get from the 1930 Census ED numbers to the 1940 ED numbers. So working with everyone that I have found 1930 Census Records, I created a Custom Report.

The first step is to go to the Publish Workspace, Person Collection, and select Custom Report.

Who do I want in this report. Initially, BEFORE we have Indexing available to use on ANY online repository, I will use the Selected Individual option, and Filtering IN Everyone who has the Residence YEAR of 1930. Step by step on how to do this are on this blog. 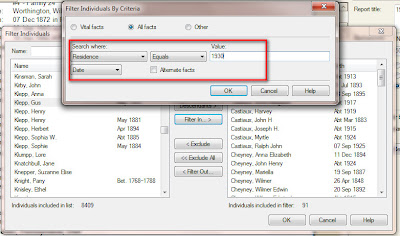 Filter IN, Selected the Residence Fact, the Date was the default field, and Equals 1930.

So, what Information to I want in the Report. Birth Marriage Death Facts, along with the Name are selected, in the Items to Include menu. I selected Preferred Only for all of the Facts. Its the basic information so that I can look at a 1940 Census Record to see if I have "the right person".

The trick her is the Sorting of the Report. I wanted the 1930 Households to be listed together AND if I have multiple Household in the 1930 census in the same Enumeration District, I wanted them together. Yes, the lines may change, but I won't know that, until I run the 1930 to 1940 tool.

This is done by putting a Check mark in the Preferred Only, on the right. Moving the Residence FACT to the top of the list, then using the Sort of Place, then Description. 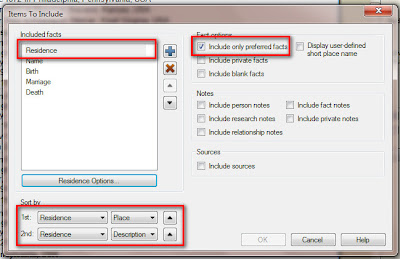 This will group the Places together (townships or towns), then the Enumeration Districts. 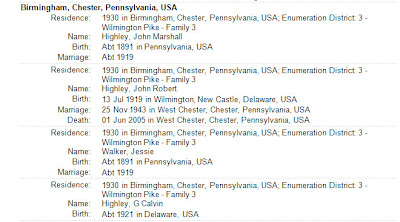 Here is one Enumeration District. In this example, there is only one household, but these are the folks that were in that household in 1930.

I then will take this information and mark up this copy of the report with the 1940 Enumeration District number.

In most cases, I ended up with only having ONE ED roll of images to look through.

You can get directly to that ED's images from the Steve Morse's website, or to any other Census Image provider, just look for the new ED record or series of pages to look at.

Right there on the Person View, is a clear picture of where this person lived, Location of Family Number and Enumeration District for future use.

Bonus Census or Residence Fact, comes with the 1940 Census Record. Where were you in 1935. This example shows that the Family did not move. But looking a little closer, there was a family member missing in the 1940 Census that was present in the 1930 Census.

It may take some time to find where the person went, but that person will wait until the indexs for the 1940 census are available. 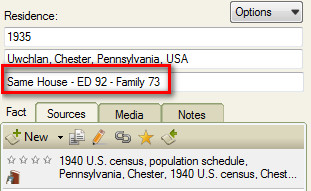 One change that I am making as the 1940 data is entered, is that I will use ED rather then Enumeration District. This is what was on the Census Record.

The nice thing now is, the file will be ready for the 1950 Census release in 10 years.