Did I caputure everything from the 1940 Census?

I thought I needed a final check up on the data that I collected from the 1940 Census.

I had a blog post that talked about the data I wanted to gather from the 1940 Census.

I created a quick report that I could look at quickly

But after I had done that, for another project, within my database, I wanted to Capture Street Addresses and enter Private Address Facts for each of those Census Records that contained Street Address.

What was helpful, for the 1940 Census preparation, was to have the ED as part of the Residence Fact. That is my indication that the data came from a Census Record. Wanting the Sorting capability, the Residence Fact starts with ED numbers, followed by a Identification Indicator, like Family number, Farm number, or Address. IF the address was there, I picked that up, following the ED information.

Since most of the time, the Residence Fact may not be displayed in a report that I might share, it became very helpful when searching Census Records.

When the Census Record had the Address, I put it into the Address Fact, selected the Option to mark that Fact as Private, so that it won't be seen online, but I captured it for my own use.

Having all of the data for the 1940 Census entered (so far), I wanted a report to make sure I have captured everything from the data that I wanted to capture.

Now for the Facts that I wanted to capture:
NOTE: I use the undocumented report feature, so I document the sex of the person, when it is offered in that document. that is a choice each of us has to make.

Another choice, was the use of the Marriage Status fact. It's an entry on the 1940 Census AND it has become very helpful in knowing when to look for a Marriage Record. Capturing that fact from previous census records also helped identify that I may need to look somewhere else, if they were Single in the 1930 Census, but didn't show up in the Household, with the parents, in the 1940 Census. My parents were both single in the 1930 Census, I could see that on the Person View, but neither were in their parents Households in the 1940 Census. In this case, I knew that they were married in 1939. When they didn't show up in either household, I knew that I had to look somewhere else, which I did. It's just been helpful to track the Marriage Status, over time. Widow, Divorced, Single, and Married are the entries on the Census Records, so I captured it.

Selecting Items to Include (Left end of the Right Hand Panel) brings up the list of Items to be included in the Report.

I put them in the order from my EXCEL worksheet that I hand wrote the information onto, making the Occupation the last item.

The reason for that is, many entries did not have an occupation listed on the Census, being last was a reminder to me, that it may or may not be there.

For the Address Fact, I looked at the Residence Fact to see if the identification was a Street Address or a Family Number. If the Address, then Address should have an entry.

The next step is to identify who to include in the Report. Selecting "Selected Individuals" brings up the screen where I Filtered IN > any Residence Fact, where the Date was 1940. 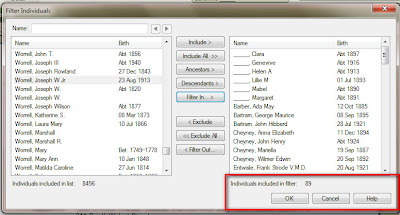 Now the report is run (after clicking OK) and the Review begins.

This first example, shows that is NO Address Fact, because the 1930 and 1940 records used Family Numbers. I did NOT restrict the Residence nor Address as Preferred Only,  in the Items to include, because I wanted a bigger picture, the Address field was that important for my next project.

This next record shows the Residence Fact and the Address Fact.

Notice that the 1930 and 1940 had street addresses, and have an Address fact for both years.

As a matter of fact, the first time I ran this report, one of the Address entries had a typo. When this Address format is used, the Place Name Authority, warning, is Ignored, so that typo's are ignored as well.

I am now confident that I have captured what I wanted from the 1940 Census, Saved this Report in the Saved Report Collection, so that I can run it again, after I add any new folk from the 1940 census.