I was reading my friend, Randy Seaver's Blog on FTM2014 with a great deal of interest:

Early in the blog post he says "bug" and later

then this is a serious bug in the program that can probably be easily fixed in a later release.

A note like that got my attention. BUT, I read his complete blog post and the FIRST thing that caught my attention was GEDCOM. RED FLAG. Now, he and I have successfully exchanged GEDCOMs before. But the flag was out there waving in the air.

In his first image was, what I thought was the answer, AND since he just opened the GEDCOM in FTM2014 told me what the problem is and how to resolve it. The issue is Un-Resolved Place Names. In order to take advantage of the Map Feature (and this is NOT a FTM2014 problem, as it's been this way before) your Place Names MUST BE Resolved. I can't tell from Randy's screen capture, but if he looks at many of his place names, there will be NO GPS coordinates in the upper right corner of the Places Workspace, and the ICON to the Left of the Place Name will have a "?? in it. That is the Unresolved Place Name ICON.

Here is an example from MY file. I have a Place in the Center of the country, and in the Right Hand Column it has Aubrey, KS (no USA), and the bottom ICON is somewhere, probably at 0 by 0 GPS. It is there because of Scots Ford, MO (no USA). This is pretty close to what Randy has in his Blog Post.

A little more about this Map. I was tracking the movement of my Great Grandfather in the Civil War. I created a "person" 11th Calvary Regiment, Kansas. I wanted to use the Map Feature. So, each battle was listed. I used the Resolved Place name option as much as I could. I have not been able to specifically locate several of these battles (yet). So, I left them UnResolved. The two indications is that the 1) State is 2 characters and no USA, and 2) the Question Mark to the Left of the Place name.

The first location, must be pretty close, but that 2nd one, not so close, at least in Bing Maps.To illustrate that first location, there is a check mark to the Left side of the Place Name in the right hand column.

Now, I do have 2 locations that have been Resolved. USA on both locations, Check Mark in the Place Name on the Left and I selected those two places in the right hand panel.

Lesson Learned: When you import a GEDCOM file, from anywhere, you WILL have clean up work to do. That goes from FTM2014 (or any version) to other Genealogy Database Management programs. At least that has been my experience.


From another file, here is the map of another Civil War soldier. From Baltimore Maryland, was at Gettysburg and wounded, caught up to his unit a number of months later, and was shot a 2nd time, then returned home. I have more details, but am only illustrating the usefulness of the Map feature, focusing on a Person and where they had events / facts. 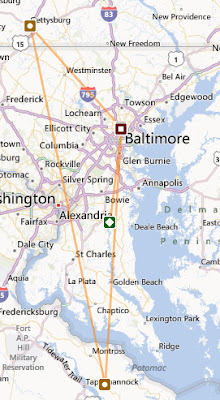 Here is a link to another Blog post on this topic.

Email ThisBlogThis!Share to TwitterShare to FacebookShare to Pinterest
Labels: 2014, GEDCOM