I have a Genea-Blogging friend, Bill West, who daily, celebrates an ancestors birthday or anniversary list on Facebook. What a great way to remember his ancestors. Please visit his Blog at:


A blog about genealogy and thoughts about the various roots and branches of my family tree as well as the times in which my ancestors lived.Included are the West, White,and McFarland families.WARNING:DO NOT TAKE ALL OF MY FAMILY RECORDS AS GOSPEL. ALWAYS CONFIRM YOUR OWN RESEARCH!

Up until now it was not very easy to generate anything that I could use, to match what he does.

One of the new features in FTM2014 is the ability to generate a number of "lists". So I went to the Publish Workspace and selected Calendar.I have used this feature before, but always had an issue when going beyond my immediate family that included more than the living family

I then clicked on Generate Report and this screen came up 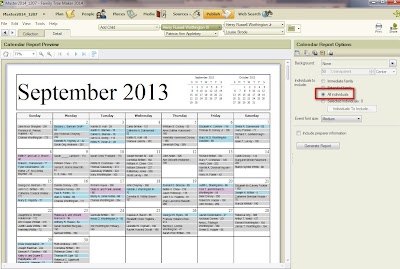 When the screen first opened, there weren't many people there, because there were only a few people listed, so I clicked on All Individuals.

As noted before, not everyone was there. But I thought this was fixed???

I clicked on the Collection Tab, at the top, and selected Person Reports, as there was a List of Individuals there. FTM2014 - Summary of Person Reports 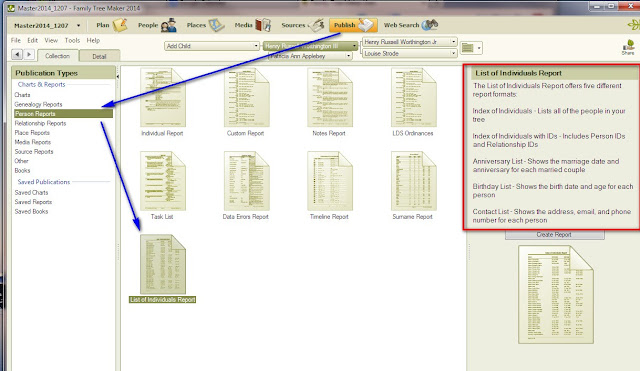 What is in the Right Hand column is the details.

I wanted an Anniversary List of every one in my Tree.

Generating the Report button on the right brought up a report. There is a pull down menu, called List Type which offers those options listed above. I had selected Anniversary List 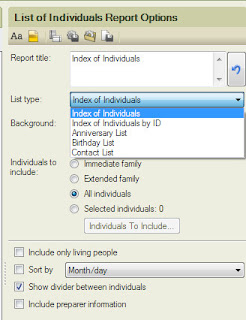 There are many options on this screen, on the Right. Who do you want in the report, which works the same way as previous versions of Family Tree Maker (Immediate Family, Extended Family, All Individuals, Selected Individuals)

Only Living People were in the report, so I removed the check mark in the Include only living people.

So now, I can do as Bill does.